After Death Communication – Fact or Fantasy?

In 2001 I wrote an article about after death communication that I’m sure would still rattle a few cages to this day. I reviewed the still popular title Hello from Heaven  by Bill Guggenheim and Judy Guggenheim which highlights over 350 thought provoking cases of testimony given by individuals who thought themselves to be first-hand witnesses to a post-mortem communication or ADC as was coined by the Guggenheims.

Just recently, I stumbled upon this short piece, posted on the Coast to Coast AM website, showing unequivocally that this elusive subject just won’t fully go away. But are we any closer some 15 years later to understanding the dynamic of the after death reality? Can we now show evidence that after death communication does exist? And if so, under what conditions?

A study from the University of Milan found that an amazing six out of ten people report having contact with a loved one who has passed away.

These experiences, they say, can include sights, sounds, smells, or simply sensing the presence of their departed loved one.

Despite the apparent prevalence of such events, the researchers reason that most people do not report them because they are afraid of being judged or ridiculed.

Although many would say that these encounters constitute evidence for life after death, the study appears to discount that possibility by labeling them “post-bereavement hallucinatory experiences.”

Similarly, a London academic who has studied the phenomenon calls it “experiences of continued presence” and theorizes that it is caused by post-traumatic stress surrounding the death of a loved one.

Coast to Coast listeners, however, may know the phenomenon by its more paranormal nomenclature ‘after-death communication,’ a term coined by pioneering researcher Bill Guggenheim.

Guggenheim studied ADCs for over 30 years and documented over 3,000 accounts of the phenomenon, leading him to conclude that these experiences were, in fact, “modern day evidence for life after death.”

Although the source of these experiences remains debatable, the Milan study indicates that they are far more common than previously believed.

Perhaps, as time goes on and more research is done, the social stigma surrounding the phenomenon will lessen and answers as to their true origin can be determined.

And here’s the piece I wrote back in 2001 which was featured on Bill Guggenheim and Judy Guggenheim’s website: Hello From Heaven 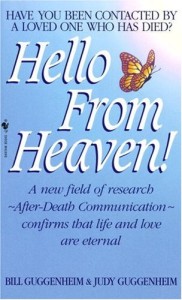 One of the most provocative questions ever to be asked is, “Does individual consciousness continue to function after a person has physically died?” Simply put, “Do we continue to live after we’ve died?” At the outset the question has paradoxical implications, and yet, there are some who adamantly believe that life after death exists. Moreover, others believe they know that this is the case. Those who have undergone what are called “Near Death Experiences” (NDE’s); “Out of Body Experiences” (OBE’s); and yet another phenomenon, unexplained yet commonly reported, “After Death Communication” (ADC’s) are among the “survival” theory’s most avid supporters.

After Death Communication or “ADC” is a term that was coined by after death researchers, Bill Guggenheim and Judy Guggenheim, authors of the book Hello From Heaven. To them what defines an ADC is “…a spiritual experience that occurs when a person is contacted directly and spontaneously by a family member or friend who has died.” During the course of their research however, they quickly realized that because of the myriad circumstances that people conveyed in their personal accounts of how they received their ADC’s, they had to re-assess the parameters for what constituted an ADC and take into account its diverse forms.

Hello From Heaven does a comprehensive job of presenting the different ways an ADC can occur, from “Sentient ADC’s” (feeling a presence) and “Auditory ADC’s” (hearing a voice) to “Partial/Full Visual ADC’s” (seeing an apparition) and “Sleep State ADC’s” (dreaming of the loved one).

Their exhaustive research into the after death communication theory spanned 7 years prior to the publication of the book in which they amassed more than 3,300 first hand accounts across all fifty United States and ten Canadian provinces. Hello From Heaven is a compendium of 353 of those firsthand accounts. Based on their research they have estimated that at least 50 million Americans or 20% of the U.S. population has had at least one ADC.

This of course is a significant number of people, many of whom have very compelling stories to tell. In the course of my own (less formal) research I have talked to many individuals who have described similar encounters. One associate of mine told me a story of a friend who had recently lost her grandfather (within a year or so). She was in the downstairs section of the house doing some routine cleaning – her mind not particularly on her late grandfather. Suddenly, she felt the presence of “someone” near her, which was unmistakable. She looked up to find what looked to be her grandfather scurrying by her and up the stairs. My associate told me that she was not only startled by who or what stood before her but she was actually quite frightened and perplexed about what she had just seen. This of course, is a case of an ADC, which caused fear and trepidation, however to the contrary many of the accounts presented in the book clearly show a common element of calm, serenity and at times euphoria. Still despite the vividness of the ADC’s and the accompanying emotion of the experiencers as recounted to the authors, the resistance to such claims of an afterlife and communication with that realm are still quite prevalent.

The authors of Hello From Heaven point out that, “Historically, psychologists, psychiatrists, bereavement counselors, members of the clergy and others have dismissed ADC’s as ‘wish fulfillment’ and ‘grief induced hallucination.’ But many of the cases inked within the pages of the book speak of ADC encounters that took place either long after the loved one had died or at a time when the experiencer had long since “gotten over” the grief state, therefore the ADC clearly came “out of the blue.”

Dr. Risa Gold, M.D. a psychiatrist and grief specialist who appeared in the HBO documentary Life AfterLife had this to say about ADC’s: “As a psychiatrist I would not use the term ‘after death communication’ because that implies a belief system which some people don’t have. However, the experience of being contacted by a (deceased) loved one is known to psychiatry and it is part of the normal grief reaction for many people.”

Although a somewhat conservative view from an expert in the field of psychiatry, the connotation appears obvious.

As far as percentages and statistics go however, the numbers seem to far outweigh the opinion of (even) those many well regarded disciplines who prefer to write-off these (ADC) experiences as mere delusion or hallucination.

During the course of my time with well known psychic medium, John Edward and the “Crossing Over” article I produced based on my one-on-one interview with him, I was afforded the opportunity to talk not only with Edward, but to a significant amount of people both on the set of the Crossing Over show in New York and at one of his live seminars in Boston. At the Boston event in particular, just prior to his getting down to the business of “reading” audience members in hopes of connecting to their “crossed over” loved ones, Edward asked how many in the audience thought they had actually seen their deceased loved ones at one time or another standing in front of them. I would say that at least 25-30% of the audience eagerly raised their hands. Statistically speaking and considering the elusiveness of the question, I would say that the percentage was quite significant.

But numbers and percentages aside, Hello From Heaven presents a touching and humane compilation of stories about life, loss, love and renewal – a theme I’d like to believe is the primary reason for so much interest in this still relatively undeveloped subject matter.

Many psychic and spiritual mediums insist that the sole motivation for connecting people with their deceased loved ones is simply love and to assure those remaining on earth that love is what allows both sides of the veil to conjoin. Others question that notion as the sole motivation but Hello From Heaven most certainly makes a commitment to highlight this point.

So if you have had what you think might have been an “ADC,” or you are hankering to cozy up with a good read and learn about touching yet provocative personal anecdotes (and lots of them), Hello From Heaven may be for you.

Alexis Brooks is a personal intuitive consultant, #1 best-selling author of Conscious Musings – Contemplations to Transform Life and Realize Potential and is
the host of the popular Higher Journeys Radio program, presented in association with Conscious Life News.  Visit Alexis on Facebook, Twitter and YouTube!

Alexis Brooks is the editor-in-chief of Higher Journeys, an award-winning talk show host, #1 best-selling author, and international speaker covering metaphysics, spirituality and personal transformation. Her work explores consciousness, human potential, and the deeper characteristics of reality from a transcendental perspective and her approach to these subjects have been described by many as “clear and easy to understand” in covering an otherwise complex and esoteric subject matter. Alexis' mantra: If you dare explore the mystery, Universe will more than meet you half way!

The Power of Neutrality