Barbara Lamb is a name many in the ET and UFO field know very well.

For over two decades, Barbara has researched and lectured on the subject of extraterrestrial encounters.

Having regressed well over a thousand individuals with these encounters, Barbara continues to reveal new vistas into the idea that many on this planet just may have direct connections with non-human intelligence. In this, my second interview with Barbara, done at her home just outside of Los Angeles, we discussed her latest project and that’s a book in which she co-authored with researcher Miguel Mendonca called Meet the Hybrids.

Some of what Barbara discusses in this sit down chat about the hybrids may surprise you, and some might seem familiar to you. Either way, I know you’ll find what Barbara has to say nothing short of extraordinary.

The International UFO Congress Meets the Hybrids By Jujuolui Kuita

Meet the Hybrids by Miguel Mendonca and Barbara Lamb 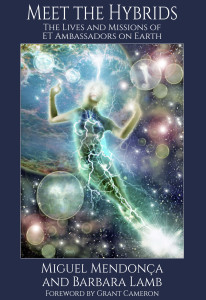 Meet the Hybrids explores the lived experience of eight individuals who understand that they are part-human and part-extraterrestrial. Guided by their star families and other entities, they are dedicated to personal missions which contribute to a larger process involving the flourishing of human consciousness, and the protection and evolution of life on Earth at this critical time. Based on over 100 hours of interviews and conversations, this book gives each of the hybrids their own voice. They share their personal journeys of discovery, their abilities, and the joys and challenges of living a dual existence. They invite the reader to radically expand their understanding of reality itself, and pursue their own evolution. The hybrid phenomenon brings us closer than ever before to understanding the ETs themselves, and offers answers to some of humanity’s biggest questions. “As an investigative journalist studying complex evidence of an ET presence on Earth, it has emerged that hybrids with human and ET DNA are emerging in increasing numbers. But why? Insights to that question from people who identify as hybrids are the core of this important book. Miguel Mendonça and Barbara Lamb have courageously focused on one of this planet’s forbidden subjects.” — Linda Moulton Howe, Reporter and Editor for Earthfiles.com, and Investigative Reporter for Coast to Coast AM “Meet the Hybrids is a cutting edge dialogue which offers an in-depth perspective from individuals who connect to a hybrid state of being. As a therapist and researcher this information is an extremely valuable resource. For those who identify as hybrids it will be both validating and healing—confirming that they are not alone. A landmark book.” — Mary Rodwell, Principal of ACERN, author of Awakening.

She is co-author of the book(s), Alien Experiences – 25 Cases of Close Encounters Never Before Revealed with Nadine Lalich and Crop Circles Revealed with Judy Moore.

Alexis Brooks is the editor-in-chief of Higher Journeys, an award-winning talk show host, #1 best-selling author, and international speaker covering metaphysics, spirituality and personal transformation. Her work explores consciousness, human potential, and the deeper characteristics of reality from a transcendental perspective and her approach to these subjects have been described by many as “clear and easy to understand” in covering an otherwise complex and esoteric subject matter. Alexis' mantra: If you dare explore the mystery, Universe will more than meet you half way!
«Previous Post
After Death Communication – Fact or Fantasy?»Next Post
The UFO – E.T. Influence on the Music Industry with Grant Cameron