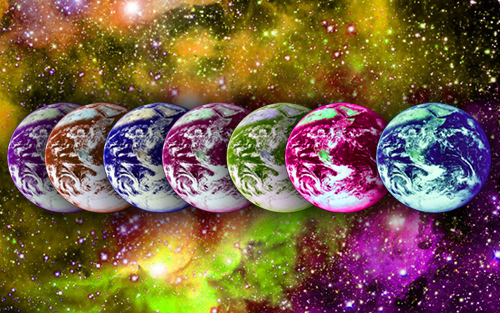 “The only place you’ll find proof is in mathematics and in alcohol.” This is what physicist and consciousness researcher Dean Radin said when being asked whether there is proof that spirituality is real. He added, “Science is not about proof, science is about evidence and gaining confidence in the evidence.”

Apparently, that’s what a recent (about five years ago) experiment on the idea of parallel worlds or universes yielded – strong evidence! The following article illuminates the exploration of such a phenomenon by way of using the approach of quantum theory as a measurement.

Some of us are acquainted with the idea that science is now yielding to the possibility of up to and maybe exceeding eleven dimensions; Instantaneous transmission of information traveling well beyond the speed of light is slowly creeping into the plausible (also called non-locality); and these ideas may well be only the rim of the rabbit hole when it comes to the true nature and process of reality. Why not parallel universes?

The following article you are about to read, from a quasi academic perspective sheds incredible light on the discoveries of such things that are coming to the fore.

It started about five years ago with a practical chemistry question.

Little did Bill Poirier realize as he delved into the quantum mechanics of complex molecules that he would fall down the rabbit hole to discover evidence of other parallel worlds that might well be poking through into our own, showing up at the quantum level.

The Texas Tech University professor of chemistry and biochemistry said that quantum mechanics is a strange realm of reality. Particles at this atomic and subatomic level can appear to be in two places at once. Because the activity of these particles is so iffy, scientists can only describe what’s happening mathematically by “drawing” the tiny landscape as a wave of probability.

Chemists like Poirier draw these landscapes to better understand chemical reactions. Despite the “uncertainty” of particle location, quantum wave mechanics allows scientists to make precise predictions. The rules for doing so are well established. At least, they were until Poirier’s recent “eureka” moment when he found a completely new way to draw quantum landscapes. Instead of waves, his medium became parallel universes.

Though his theory, called “Many Interacting Worlds,” sounds like science fiction, it holds up mathematically.

Originally published in 2010, it has led to a number of invited presentations, peer-reviewed journal articles and a recent invited commentary in the premier physics journal Physical Review.

“This has gotten a lot of attention in the foundational mechanics community as well as the popular press,” Poirier said. “At a symposium in Vienna in 2013, standing five feet away from a famous Nobel Laureate in physics, I gave my presentation on this work fully expecting criticism. I was surprised when I received none. Also, I was happy to see that I didn’t have anything obviously wrong with my mathematics.”

In his theory, Poirier postulates that small particles from many worlds seep through to interact with our own, and their interaction accounts for the strange phenomena of quantum mechanics. Such phenomena include particles that seem to be in more than one place at a time, or to communicate with each other over great distances without explanations.

There is no fuzziness in his theory. Particles do occupy well-defined positions in any given world. However, these positions vary from world to world, explaining why they appear to be in several places at once. Likewise, quantum communication of faraway particles – something Albert Einstein called “spooky action at a distance” – is actually due to interaction of nearby worlds.

Many Interacting Worlds theory doesn’t prove that the quantum wave does not exist, or that many worlds do exist, Poirier said. The standard wave theory is perfectly fine in most respects, providing agreement with experiment, for example.

“Our theory, though based on different mathematics, makes exactly the same experimental predictions,” he said.

“So what we have done is to open the possibility that the quantum wave may not exist. It now has only as much right to that claim as do many interacting worlds – no more and no less. This may be as definitive a statement as one can hope to make about a subject that has confounded the best minds of physics for a hundred years and still continues to generate controversy.”

At this nanoscopic scale, particles don’t act like larger objects, whose position over time is well defined, such as an airplane or an apple falling from a tree.

Instead, particles sometimes behave as fixed particles, and other times behave more like waves. Even weirder than this: when scientists look at a quantum particle, it behaves like a particle. When they’re not looking, it suddenly starts acting like a wave.

Even Albert Einstein is said to have disagreed with the quantum idea that particles could exist in an approximate possible location or possibly more than one location at a time rather than just one place.

“I like to think the moon is there, even if I am not looking at it,” Einstein famously said on the topic.

Scientists dissect and disagree to this day as to exactly what’s happening on this tiny scale. Although they may not know for sure what’s happening, they do at least know how to predict the wave-like behavior of the quantum particle when it’s not being observed.

For this, they use the Schrödinger Equation, a mathematical description invented in the ’20s that describes how these crazy particles move as a wave over time.

At least, they did until Poirier took another look at the wave and upended established quantum theory.

Some physicists can make much about the philosophy of quantum mechanics, Poirier said. For a chemist such as himself, however, he is less interested in the philosophy and more interested in solving Schrödinger’s quantum wave equation to help him understand chemical reactions.

“In physical chemistry, we are interested in solving problems involving large, complex molecules as accurately as we can,” he said. “We’re looking for the reaction rate for a chemical reaction, the allowed quantum states of a molecule and the spectral ‘fingerprint’ that a molecule emits or absorbs when we shine a light on it. … There is a paradox here. To answer these kinds of questions accurately requires quantum mechanics, but solving quantum mechanics problems for large systems (more than three bodies) is extraordinarily difficult.”

To ease the computational burden, chemists borrowed an idea from engineers to allow the grid points to move like a liquid and “flow” with the quantum wave. Once moving, the grid points trace out trajectories, much like a baseball. While engineers use the technique to model fluid flow, chemists use it to help calculate the motion of the quantum wave –hence the term ‘quantum hydrodynamics.’

At a certain point, Poirier wondered what would happen if you left the wave computations out and just worked with the quantum trajectories and if the simpler numerical simulation still would be valid.

“My key insight was to realize that all you really need are the moving quantum trajectories themselves,” he said.

Alexis Brooks is the editor-in-chief of Higher Journeys, an award-winning talk show host, #1 best-selling author, and international speaker covering metaphysics, spirituality and personal transformation. Her work explores consciousness, human potential, and the deeper characteristics of reality from a transcendental perspective and her approach to these subjects have been described by many as “clear and easy to understand” in covering an otherwise complex and esoteric subject matter. Alexis' mantra: If you dare explore the mystery, Universe will more than meet you half way!
«Previous Post
Earthing – Let Mother Nature Do Her Job!»Next Post
Why Sound Healing is Striking a Chord with So Many