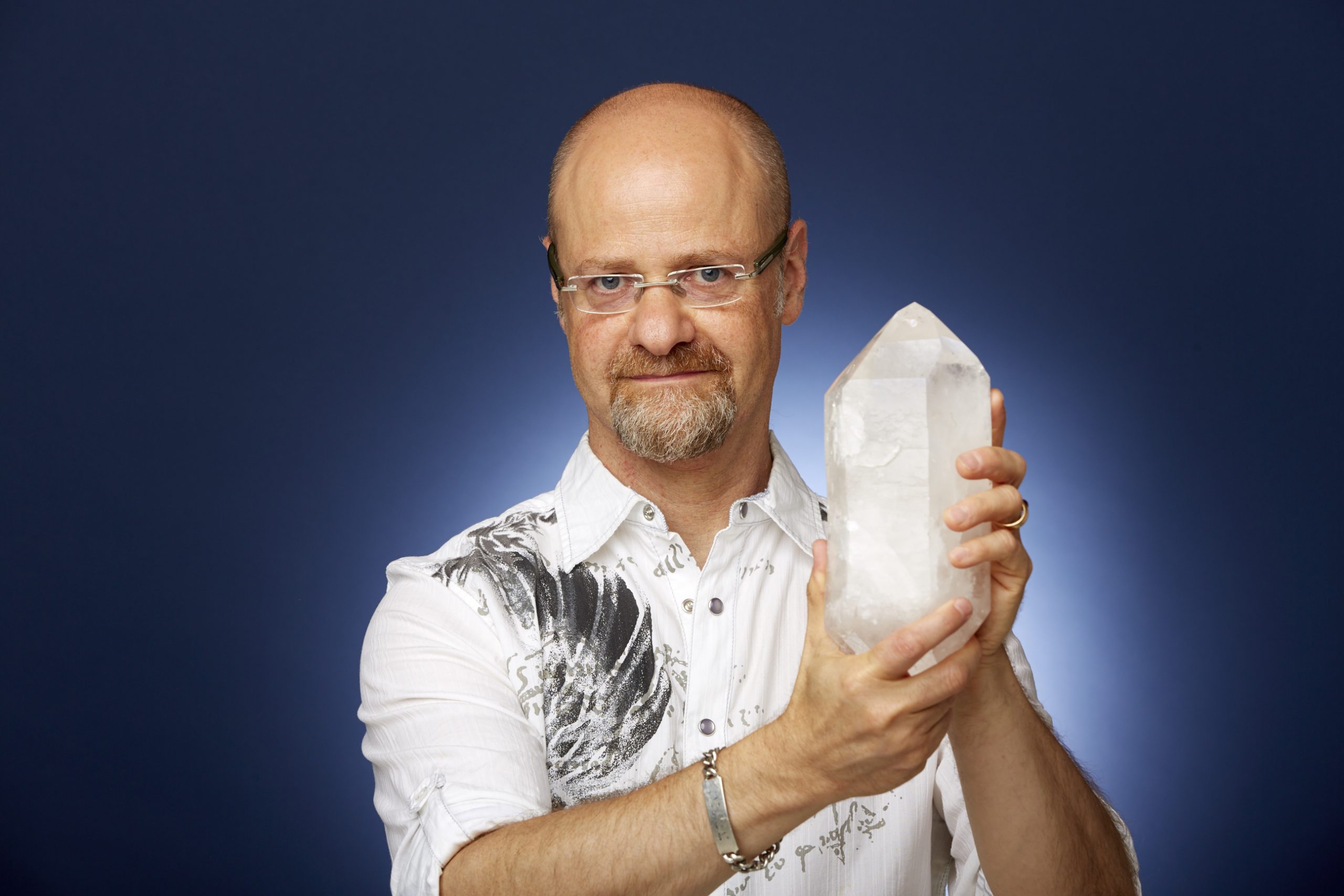 Did a “chance” encounter with Moldavite lead me down a new life path?

I just love it when I get to hear captivating real life stories of individuals who have exciting adventures to share. The individual you are about to meet is one such case-in-point!

Kyle Russell, curious questioner, earthly explorer and I might add crystal guru is our newest Higher Journeys blog contributor and I couldn’t be more thrilled!

Kyle and I met  a little over a year ago (2019) after I’d learned of him through a keynote speaking engagement he’d done at a large annual conference hosted by Spirit of Change.

Shortly thereafter, I hosted Kyle on my show. And the rest, as they say, is history!

Cards on the table…here’s why I think his brand of “crystal wisdom” is so special (see if you agree) – After years and years of research into the energetics of crystals (aka, the metaphysics of minerals), I’d exhausted most of the A-list resources weighing in on what, how, and why they work. I can only attest to one or two so-called crystal experts with whom I felt an instinctive resonance. I just wasn’t connecting.

Nonetheless, I’d carry on with my own interpretation, philosophy and constant learning curve about the vast (and mysterious) world of the mineral kingdom and the massive energy signatures they possess.

After speaking with Kyle and taking in, shall we say, his rather unorthodox and oh-so-refreshing philosophy of how and why crystals work and most importantly, how they work with us – I was intent on learning more from him. And now, you’ll get the chance to do the same!

After reading both this inaugural blog post from Kyle and then a subsequent peruse about him and his fantastic collection of earthly (and heavenly) gems, you’ll know why I just had to bring him on to the Higher Journeys team.

So welcome Kyle! I’m just tickled pink (tourmaline) to have you on board!

It’s an honor to’ve been invited to write for Alexis Brooks‘ Higher Journeys site. We met in my shop – the Portal Crystal Gallery in Arlington, MA – we live two towns from each other. That led to an extraordinary interview on her show, which she dramatically titled: Crystals, ET Contact and an Odyssey the Likes of Which You’ve NEVER Heard! MUST LISTEN!

I thought I’d take this opportunity of writing my first Blog here – to introduce both myself and what I call both the and my Crystal World – to you, our dear readers!

In short, what I (alone?) call the Crystal World, is “the scene” – ranging from the extensive mining and distribution industries to vendors, jewelers, and gemologists – with metaphysical crystal lovers (like me and many of my clients and customers) sprinkled in for good measure.

Actually – while all those other spheres are quite significant – they don’t impact me nearly as much as the last-listed cast of characters. So in truth, my peers – both service providers and consumers – are the part of the Crystal World that will be most covered in my blog series. I guess that you could call that my Crystal World.

It’s not all about me though – there are a dozen shops even in my own Boston area – and a network of wholesalers who serve their regions and the globe. We all cross paths sooner or later at the gem shows which bring us together, including the biggest one in the world, which happens in Tucson every year. Alas, I haven’t been to any shows since I was vending myself at the Tucson Gem Show in 2020. Actually, I was at just one of over 45 such shows held between January and February, and the one that bears that official name doesn’t actually happen till I leave town (in later February).

Buyers and Sellers have been chomping at the bit to get into the ring together for a year. Fortunately, my shop was closed only 3 months, and we opened in June of 2020. Some prize-winning customers – as well as the largesse of the government and my landlord – kept me alive through the dead time. Quarantined for so long, a lot of people took to Social Media, where there are legions of people selling and talking about crystals. TikTok is one such platform that’s exploded in the past year, and I’m now riding that wave, having gone viral numerous times since I started posting in the Fall of 2020.

I wasn’t always this plugged in. I stumbled on the larger Crystal World in High School – which I did in Brazil – where of course so many crystals come from. I didn’t think too much of them till I’d graduated college and was with a colleague, visiting Robert Simmons‘ (co-author of best-selling THE BOOK OF STONES) North Shore, Boston area shop in 1987. He’s become quite a big name in the Crystal World for many reasons that I won’t get into here. But he was the catalyst for my getting into crystals. What happened that day is that he generously gave me a piece of Moldavite (a cult-status space-stone, or tektite) for which I’ll be forever grateful. That (really the ensuing experience) catapulted me wholesale into the Crystal World. You can read My Moldavite Breakthrough blog here. It has a companion podcast to boot, and gives you all the ins and outs of that transformational experience. The interview I did with Alexis also delves into it heavily.

I immediately began doing healing work (one-on-one, with clients), as well as buying and selling crystals. I fill out this story, with childhood anecdotes and so much more, in my forthcoming book: Crystal Energy, Understanding and Working with Stones for Clarity and Flow (which you can learn more about by hopping onto my mailing list on my main site, here). As of this writing – it’s not out yet – but it will be soon. My next blog will probably be devoted more specifically to it.

I did some other things, career-wise, that took me away from the crystals for a couple of decades – though I always kept something crystal-oriented percolating in the background – specifically attending and booking booths at metaphysical expos, which I got serious about again in 2012, when I came back to crystals full time. I did the longest running such event in the country: the New Life Expo a number of years in New York City, including being a speaker multiple times there. I’ve also been a part of the Natural Living Expo in the same way for even more years (right in Central Massachusetts). It’s the largest such event on the East Coast.

I was there during the Harmonic Convergence of 1987, and now, 34 years later – I’m still in the mix – maybe more than ever. I’ve synthesized all my knowledge into my first and comprehensive book. It’s based on my shift 10 years ago from practicing to teaching about crystals, sharing my knowledge. That required the development of a paradigm, in my case the 10 Human/Crystal Energy Zones, by which all stones can be categorized (a worthy topic for future blogs). I had two other retail stores at the turn of the 90’s, and now I’m firmly back in the retail world. After having bought for decades from others at shows, I’m finally selling at even the biggest show in the land. And my online business is finally taking off, thanks to the most newfangled of Social Media platforms.

That’s your introduction to me, Kyle Russell of Crystal Concentrics – and by extension – the Crystal World I’ve been connected to for all these years! I look forward to sharing with you more insights. Feel free to contact me (Kyle@CrystalConcentrics.com) with any questions or topic suggestions for future articles.

Time Travel? Yes – I Met My FUTURE SELF!

Crystal Concentrics is a proprietary system developed by Kyle Russell, designed to improve human wellbeing, align individuals with their own higher purpose, or Spiritual Self, and ideally heal or process the earthly challenges of mind and body which routinely present themselves in the course of our life cycle.
«Previous Post
The Great Awakening – 7 Resources To Support Your Shift»Next Post
Monoliths and Mandela Effects – Are They Connected? Cynthia Sue Larson Explains