It was pioneering broadcast journalist Edward R. Murrow who said, “We hardly need to be reminded that we are living in an age of confusion – a lot of us have traded in our beliefs for bitterness and cynicism or for a heavy package of despair, or even a quivering portion of hysteria. Opinions can be picked up cheap in the market place while such commodities as courage and fortitude and faith are in alarmingly short supply.”

Murrow remains one of legendary journalist Dan Rather’s  biggest heroes. And for good reason. Courage, fortitude, and faith are qualities that Rather has and still carries with him to this day. In this special episode of Higher Journeys Radio, you will get a sample of just what Murrow was speaking of, and what Rather truly exemplifies. Politics. Media – old and new. Choices in how we get important information, and the responsibility of the news consuming public to wield their ability to use logic, analysis and discernment when it comes to rendering a verdict on the authenticity of any given headline. We discussed these critical issues and more.  Listen in now to this –  my exclusive interview with Dan Rather.

Highlights from this exclusive interview…

“A free and independent press…is the red beating heart of freedom and democracy.” – Dan Rather

Edward R. Murrow – Introduction to This I Believe 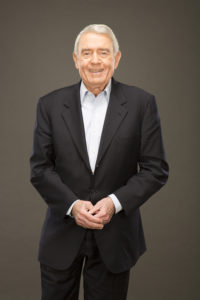 With a famed and storied career that has spanned more than six decades, Dan Rather has earned his place as one of the world’s best-known journalists. He has interviewed every president since Eisenhower and, over that time, personally covered almost every important dateline in the United States and around the world. Rather joined CBS News in 1962. He quickly rose through the ranks, and in 1981 he assumed the position of Anchor and Managing Editor of the CBS Evening News-a post he held for 24 years.

His reporting across the network helped turn 60 Minutes into an institution, launched 48 Hours as an innovative news magazine program, and shaped countless specials and documentaries. Upon leaving CBS, Rather returned to the in-depth reporting he always loved, creating the Emmy Award winning Dan Rather Reports on HDNet. Now, building upon that foundation, he is president and CEO of News and Guts, an independent production company he founded that specializes in high-quality non-fiction content across a range of traditional and digital distribution channels.

Alexis Brooks is the editor-in-chief of Higher Journeys, an award-winning talk show host, #1 best-selling author, and international speaker covering metaphysics, spirituality and personal transformation. Her work explores consciousness, human potential, and the deeper characteristics of reality from a transcendental perspective and her approach to these subjects have been described by many as “clear and easy to understand” in covering an otherwise complex and esoteric subject matter. Alexis' mantra: If you dare explore the mystery, Universe will more than meet you half way!
«Previous Post
Rey Hernandez of F.R.E.E. – Down the Rabbit Hole of ET Encounters»Next Post
Politics Now – But What’s Next? Ego Death!