Humans, Emojis, and the Reduction of Consciousness

On its face, it seems innocent enough. Colorful little icons to express every possible emotion imaginable.

Are you feeling happy, giddy, sad, mad, defiant? In the mood to celebrate; wanting to do a “happy dance?” Are you frustrated? Feeling like Sh#!t? If so, you’re in luck. There’s an emoji for that.

With an ever-increasing intimacy between man and machine, technology it seems, never misses a beat in its effort to mimic human behavior, or better yet, invent it.

The explosive use of these little mini me’s and the reliance on their gestures to express yours proves the latter to be undeniably true.

Admittedly, I’ve been guilty of using the occasional smiley face or two, but it wasn’t until I had a stream of consciousness about the machinations of the virtual world that an epiphany emerged: There’s more to emojis than meets the I – CON!

Emoji, defined on dictionary.com as “…a small digital picture or pictorial symbol that represents a thing, feeling, concept, etc., used in text messages and other electronic communications and usually part of a standardized set”, is said to have been initially developed by Shigetaka Kurita, a Japanese technology professional in the late 90’s who at the time was working on the NTT DoCoMo’s i-mode mobile Internet platform.

It was later picked up and then proliferated by the likes of Apple, Android, and other major mobile operating systems, and now, it has become a phenomenon that both child and adult alike can’t seem to emote without.

“I like emojis a lot. They can express how you’re feeling.” She then illustrates by sticking her tongue out and up pops an emoji that mirrors her exact sentiment of the moment.

With more and more emphasis being placed on the “convenience” of technology, what at first may have seemed like just another mechanism by which to make life easier appears to have become a device to take it away. Why bother expressing yourself in words when you can have a little micro-sized image on a screen do it for you?

And speaking of words, here’s how impressed the Oxford Dictionaries was with the ever-growing lifestyle trend of emojis. In 2015 they named 😂 (face with tears of joy) as their Word of the Year!

You heard me right – “Word” of the year!

At this point you may be tempted to search feverishly through your mobile emoji library to locate the perfect little symbol to express how you’re feeling after hearing about this outlandish bit of news.

Regardless of your reaction, I think it’s worth noting that the idea of taking the human out of human being may just be a reality we’re facing in real-time!

Investigative journalist and alternative researcher Jon Rappoport, whom I had the pleasure of interviewing back in 2014 is perhaps the most lucid in distilling the erosion of the individual. In our talk we discussed the dangers of following the collective and the consequences of forfeiting original, individual thought – particularly if you’re handing it over to some little dude or dudette on a computer screen or mobile device. Sadly, many are doing just that without any clue of the possible consequence.

In one powerful essay he authored back in January of 2014, he says…

The old phrase, ‘the machine age,’ takes on new meaning. Sellers are betting that consumers want machines that understand them. This bet has a corollary: human to human interaction is just too complicated and unpredictable. …Instead, machines can be programmed to reflect their users.

“I like the little poop one…” as she’s air drawing a picture of poop with her fingers. “I’d be like, Oh my God, I’m feeling like poop!” And then poof, an emoji of, you guessed it, a little pile of poop (with eyes and a smile, of course), pops up on the screen.

But is the reflection mirroring who you are and how you’re feeling or a means by which to digitally program how they want you to feel?

We’ve long known that Hollywood film has been masterful at creating images and behaviors, geared not only to get large audiences to emotionally respond to what they’re seeing, but also to, in some cases, adopt the behaviors that are paraded in front of them. It should be no surprise then that a major motion picture house is planning to release a feature length animation film based on – you guessed it – Emojis!

Given that verbal language has stood as a powerful means by which an individual can use to express him or herself, is it no wonder that this form of communication is slowly but surely being extinguished from the human experience? 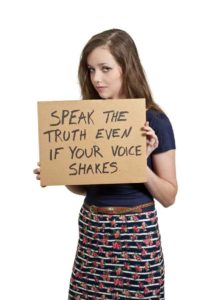 Ever noticed that every time you turn around these days, you see someone – In a television ad, on an Internet post, or social media page holding up a sign with a message? It’s simply called, “Sign Holding,” a trend that supposedly began in 2011 when a 28 year old New York City activist who posted a plea on a popular website for people to hold up a sign that simply said, “We are the 99 Percent,” implying that the opposite reflects the nation’s richest 1 percent who control nearly half of America’s total wealth. This act of “emoting” came in the midst of the now famous occupy movement, but it didn’t end there. Now, we see sign holding campaigns popping up everywhere and in every possible scenario – from the serious to the down-right superficial.

Where its guise may seem to be rooted in social activism, my surmise is that this societal push denotes something deeper and far more disturbing.

The Reduction of Consciousness

If one were to zoom out their view and look below from a purview of pure objectivity, one would clearly see something quite contrived underway.

This downgrading of the individual human spirit is far from accidental. It’s launched as a sustained propaganda campaign, the ultimate purpose of which is top-down control over the population.

It’s ironic to think that verbal language has been targeted as the next tool to be snatched away from the human species’ reality arsenal. Still many have seen fit to weaponize language – hurling hateful, fearful, and degrading sentiments in every possible direction and at any given moment. So human-haters, don’t give up hope, language still has its merits!

Humans, Emojis and Dingbats – Oh My!

It was Archie Bunker, played by Carroll O’Connor who popularized the slang use of the term “dingbat,” referring to his wife Edith, played by Jean Stapleton, who he felt to be stupid and empty-headed.

One can’t help but to find it quite curious that the term “dingbat” is also defined as a typographical device other than a letter or numeral (such as an asterisk), used to signal divisions in text or to replace letters in a euphemistically presented vulgar word. (Note above, my use of one of those vulgar words!)

Dingbats are often associated with emojis in technology parlance!

Perhaps it’s not necessary to have this scenario spelled-out in words, or worse yet spoken, when you can certainly get the picture without them these days!

Consciousness is eroding. Not because it’s finite in its existence, but because it’s been assaulted, and sadly without any notable resistance to speak of.

But all is not lost…

When initially exploring a working title for this article, I was mightily tempted to call it, “Humans, Emojis, and the Conquest of Consciousness.” But I thought, “That would imply defeat – A done deal – A war already won.”

The war on consciousness, though real as it may be, is still up for grabs. When you claim your individuality, your sovereignty, and your authentic voice, and resolve to use it, the war will be over – once and for all, relegating the virtual species of emojis extinct.

Resources for this article include:
Emoji – Wikipedia
Jon Rappoport/NoMoreFakeNews.com

Alexis Brooks is an award-winning broadcast journalist, #1 best-selling author of Conscious Musings – Contemplations to Transform Life and Realize Potential and is the host of the popular Higher Journeys Radio program, presented in association with Conscious Life News. Visit Alexis on Facebook, Twitter, and YouTube!

Alexis Brooks is the editor-in-chief of Higher Journeys, an award-winning talk show host, #1 best-selling author, and international speaker covering metaphysics, spirituality and personal transformation. Her work explores consciousness, human potential, and the deeper characteristics of reality from a transcendental perspective and her approach to these subjects have been described by many as “clear and easy to understand” in covering an otherwise complex and esoteric subject matter. Alexis' mantra: If you dare explore the mystery, Universe will more than meet you half way!
«Previous Post
Experiencing Alternate Realities»Next Post
The Near-Death Experience – An Overview