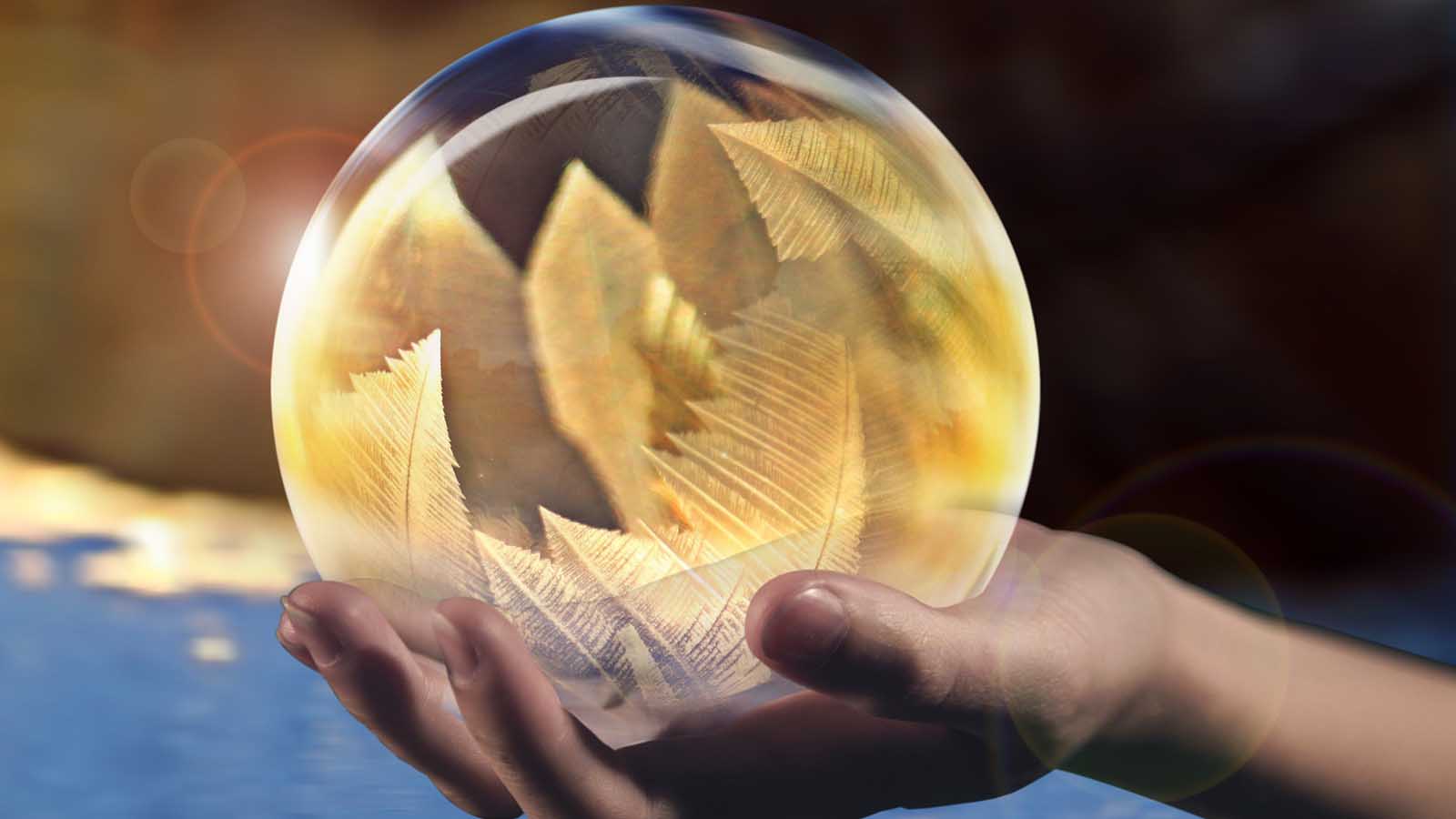 Skeptics Step Aside! Psychic accuracy is not just about a lucky guess. The science may tell us why.

Here’s the set up.

Your good friend manages to twist your arm into going with them to get a psychic reading.

You’ve never done it before and furthermore, you don’t buy into such nonsense as “some psychic I’ve never met telling me that in a few months time, I’ll be featured in a new show on a well known TV network.”

But despite best efforts to make excuses to not go with them for a reading, you give in. You do it. And the psychic (we’ll call her Shannon) insists on reading you first.

She asks you to sit down. She begins staring, not at you, but around your body, as if scanning the energetic territory that surrounds you, often referred to as an aura.

She then spits out the future, as if with certainty. She gives detail – even a rough time frame.

You of course say, “Okay, thanks. Let’s see.” You’re polite, but dubious at best.

A few months go by, and lo and behold, out of the blue: Bingo! It happens!

Your first inclination – A lucky guess? But How did she do it? And how could she have been so accurate about something you didn’t even know at the time?”

Throughout history many psychics have long been relegated to a class of charlatans, albeit some more convincing than others, who are adept at carrying out cheap parlor tricks; doing nothing more than asking leading questions, and giving generic answers.

Some skeptics have even made illustrious careers out of debunking the reality of psychic ability, vehemently assigning it to nothing more than pseudoscience.

Well known skeptics like Michael Shermer and (the late) James Randi are and were notorious for holding steadfast to the idea that anything even remotely related to the area largely referred to as paranormal had absolutely no basis in science whatsoever, and therefore it cannot be considered real.

And yet, history is replete with multiple accounts of psychic information that have proven to be stunningly accurate, way beyond the pale of coincidence or crafty quackery.

Still, the dyed-in-the-wool doubters refuse to relent on their postulate that such feats cannot possibly have any legitimacy in and of themselves. As a result the how and what of psychic ability still goes largely unexplored and along with it, any in-depth investigation into how something beyond our known physical construct not only exists, but can be tapped with the right set of tools.

But what are those tools, and moreover what are some psychics tapping into in order to procure accurate information?

Another term that sits alongside and is sometimes used interchangeably with psychic ability is known as intuitive ability – the idea that each of us has the capacity to occasionally glean insight that reaches beyond the five physical senses, though often it will use those fundamental faculties to get information through several channels including auditory (also known as clairaudience), visual (clairvoyance) or feeling (clairsentience).

It’s said that each individual typically tends toward one method of getting an intuitive hit vs. another.

I for one, often get intuitive insight via the clairaudient channel…since I do a lot of talking for a living, no surprise.

Though many people can get confused about whether an insight that seems to “come out of the blue,” may be an intuitive prompting or nothing more than mindless brain chatter (and that does happen), most can claim an occasional intuitive hunch that proved remarkably accurate,  and that didn’t originate from the conscious, rational mind.

Though the average individual can recall a few intuitive hits that they resolved to act on, there are others who seem to be more readily wired to that mysterious repository where psychic (or intuitive) information originates.

Where the information “Lives”

It has been called the Akashic – a term derived from the Sanskrit word akasha used to describe a life force and information field that has the ability to house both human thought and action (source: Wikipedia) and carry within its record not only past events but future as well.

We’re not talking about just select, special or unique events, we’re talking all events. Whether thoughts or things, some maintain there’s a record of it, and it “lives” in the Akashic. Moreover, each and every one of us is by default plugged into this vast field of energy and information.

Beside the “Akashic,” other terms have been used somewhat interchangeably in more recent years to describe this field, like The Unified Field, readily discussed in the new documentary film THRIVE II, The Zero Point field, a concept described in depth in the book by Gregg Braden Awakening to Zero Point, and another landmark book simply called The Field by Lynne McTaggart.

Each speak of this reservoir or sea of information as eternal, fluid and connected to us all, as we are to it.

The unified field, based on the unified field theory, a term coined by Albert Einstein has more of a scientific leaning that is described as an attempt to “tie all the fundamental forces of nature together in a single theory.” . Said another way, the unified field represents a literal and virtual unification of all things both animate and inanimate. Combined, they create a giant web of energy, frequency and information. All that is or ever has been or will be, exists in an ever-evolving present.

Whether explained in scientific terms or understood from a more spiritual or philosophically based perspective, this “field” remains omnipresent and connected to us all. It is also the means by which we connect with each other, whether through the conscious or unconscious channel.

Ervin Laszlo, well known philosopher of science and proponent of the theory of quantum consciousness once wrote:

A universal information and memory field could exist in nature, associated with the fundamental element of physical reality physicists call the unified field…Honoring an ancient insight, this is the aspect or dimension of the unified field that I have called the Akashic Field.

Whether expressed philosophically or scientifically, history has shown that this field, apparently absent of both time and space exists, hence the reason why some psychics can tap so called “future” events from the point of the present (when the reading is done). The field does not operate linearly, and therefore once connected to it, information can be gleaned from any perspective within the time-space continuum.

Regardless of the terms that are used or even the science that supports the reality of this field, it seems that psychics like the one we call “Shannon” in the above scenario are tapping this field to get insight about those they are reading. Some however seem to have the ability to tap it with more accuracy than others. Though many veteran psychic readers may or may not be aware of, for example, Unified Field Theory, they know undoubtedly something very powerful is going on.

One well known reader, Nicole Bowman (a.k.a. Live the Light) who’s done thousands of sessions with her clients ranging from relationships to career guidance to connecting with the “other side,”describes her process this way…

During readings, I connect with the soul of the client and a higher consciousness known as God or Great Spirit to answer their questions. If it is a psychic reading where future events are predicted, I typically don’t feel anything. I just know what is going to happen to them and the spiritual lessons they are learning. If it is a mediumship reading where I connect with the deceased, I will sense how the person died. For example, if their loved one was on a breathing machine, I may have difficulty speaking at first or experience constriction in my throat. However, once I mention this to the client, they will identify the loved one, the connection is made, and the sensation stops. Everything that happens during a reading is for the evolution of a client’s soul and their healing journey.

Whether a professional psychic reader or just a lay person looking to become their own DIY psychic, the opportunity to actively link into the field exists, just waiting to be accessed.

As a footnote, the hypothetical scenario illustrated above where the individual was told by the psychic that in a few months time they would be featured on a “network television series,” is not entirely made up.

In April of 2020 I was getting my own reading with a psychic from a well known psychic network (not something I do that often), and in the midst of the psychic telling me a few things that I had confirmed were indeed accurate, he said, with specificity I might add, that yours truly would soon be featured on a new television series on The History Channel. “I see this for you,” he said. “Have you ever heard of Celebrity Ghost Stories?” he asked. I answered affirmatively. “Like that. It will be that kind of a show. You’ll see.” He repeated, “The History Channel, A&E Network. Write this down.” I did. And I have the paper with scribbled notes from that reading until this day.

In August of 2020, out of the blue, I was in fact contacted by A&E Network and asked to be part of a team of subject matter experts for the new series The Proof is Out There on the History Channel. A show that investigates anomalous footage – video, photos and audio about otherwise unexplained phenomena.

At the time of this writing, “Proof” has become exceedingly popular after debuting in December of 2020 on the History Channel and has now completed its season one.

As much as I’d like to say otherwise, given the work that I do, I was completely dumbfounded by the accuracy of this particular psychic’s prediction. I never cease to be amazed at how this process happens, how the universe works, how the field works…

And how we are connected to its limitless potential, whether we’re a psychic superstar or not!

Want to hear the whole story about how my debut on the History Channel happened
and the psychic reading that started it all? Then watch this video!

How to Harness Your Psychic Abilities

Try This Surefire Method for Decoding Your Dreams

Alexis Brooks is the editor-in-chief of Higher Journeys, an award-winning talk show host, #1 best-selling author, and international speaker covering metaphysics, spirituality and personal transformation. Her work explores consciousness, human potential, and the deeper characteristics of reality from a transcendental perspective and her approach to these subjects have been described by many as “clear and easy to understand” in covering an otherwise complex and esoteric subject matter. Alexis' mantra: If you dare explore the mystery, Universe will more than meet you half way!
«Previous Post
The Great Awakening – 4 Ways to Cope with the Shifting Tide of Our “New” World»Next Post
Why My Psychic Reading Was SPOT ON!