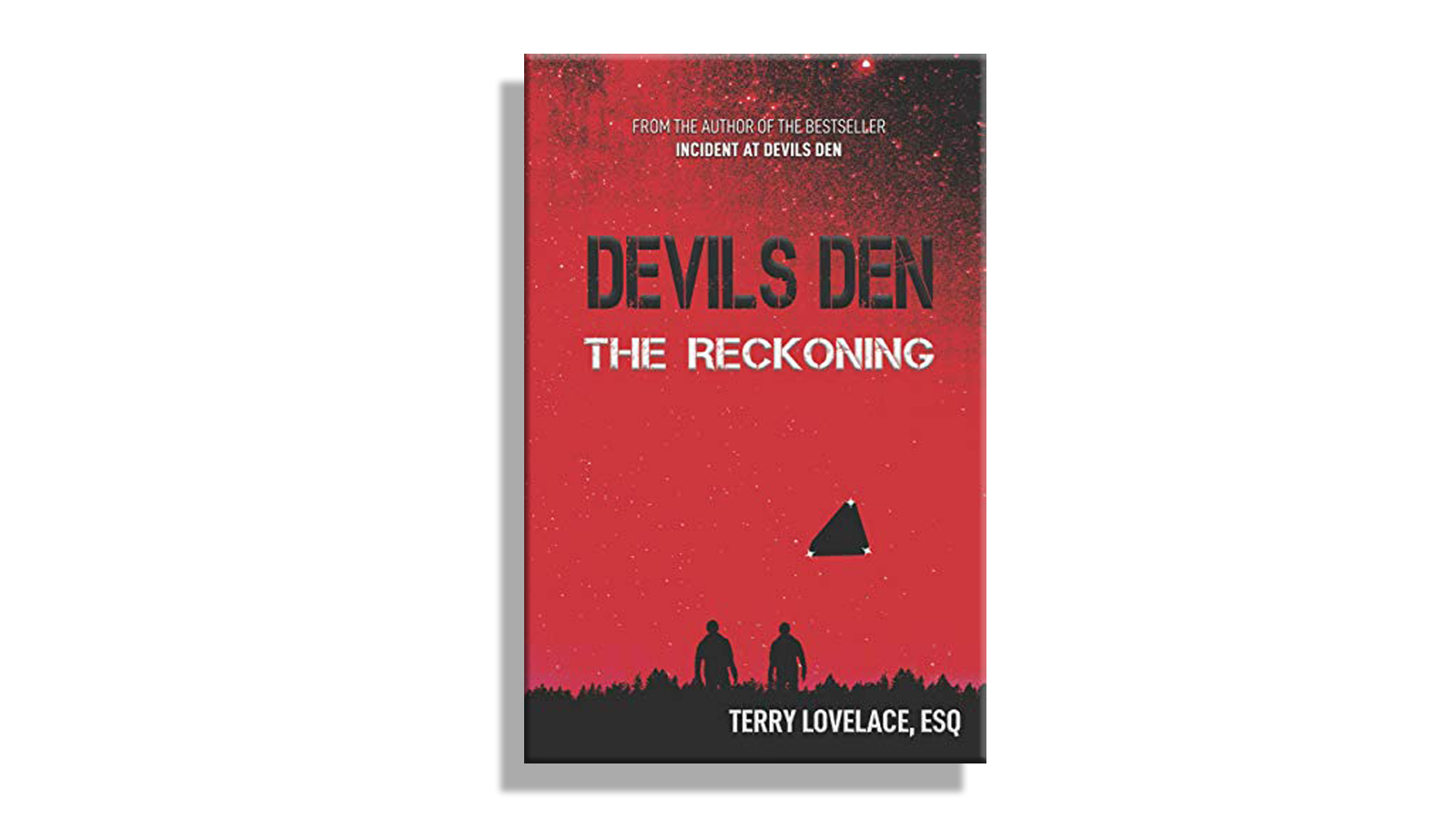 As a long time researcher in the field of what could broadly be called “paranormal,” I’ve received my fair share of criticism when it comes to parsing this nebulous landscape of high strangeness.

Having received hundreds upon hundreds of email messages and comments over the years from well intentioned individuals, gung ho to share their perspectives within the labyrinth of phenomena, rather than admit that they just don’t know the origin, purpose or motivation of any given encounter, feel the incessant need to explain with certainty just what the phenomena denotes.

Humans for the most part have long held a believe or die attitude toward many things they truly don’t understand. Whether via religious teaching, cultural indoctrination, or just the comfort that putting a scenario in one definitive bucket of belief brings to them, many people just can’t resist the temptation to put their “facts” on the table and subsequently stand at the ready to defend their truth, at all costs.

Such is the case with the following message that was sent to Terry Lovelace, author and experiencer (of lifelong non-human encounters), who’s latest book, Devils Den – The Reckoning highlights, among other accounts, such an example.

In this excerpt from the book, Terry includes his analysis about what Suzie wrote and the bigger picture of what may have been going on with her own sojourns into the strange and (still) unexplained landscape of phenomena.

I saw your television show episode on My Horror Story. I also listened to one of your podcasts. I tell you they’re no demons, they’re not here to harm us in any way. They are here to help us enter a new era of peace and prosperity. Our government knows this, but it’s kept a secret. I had my first experience when I was four. A tall angelic being used to visit my room. I was still sleeping in a crib and I remember how the room lit up when they came to visit me, and his head almost touched the ceiling. Sometimes just the one, sometimes six of them.

They glowed white and their robes were navy blue around their chests. They spoke to me and told me they were my guardians, and I could call on them whenever I need them. I call them my “angels.”

My first husband was killed in the Afghan War. We had a one year-old at the time. When I got the news, I was crushed. But I already knew it had happened. Two days earlier two of them appeared in my bedroom and told me, “Everything will be okay, Roland is with God.”

My family and church stood by me, and my angels were with me at night and comforted me. I knew through them that my husband was okay and in a better place with the Lord. I knew we’d make it and we did.

Your story scares people. People should not be afraid, and you make people afraid of them. I know they’re here to help.

If the things you met were as evil as you said, they were not from another planet. You saw demons from hell. Did you or your buddy ever mess around with Ouija boards as teenagers or fool with spells and witchcraft? That’s what people do and it’s an invitation.

A lot of people don’t believe in the devil anymore. He’s real and so is his army. If your faith in Jesus Christ were stronger, you’d have been protected by just calling on his name.

I don’t believe UFOs come from other planets. I suggest you get connected with a Christian church and approach this matter through prayer.”

I’m tempted to think of Suzie’s experience in terms of a paranormal rather than a spiritual matter, if you can make that distinction. I contrast this story to Stephan’s opossum experience in the previous story.

The Ouija board and magic spells statement takes me back to my cousin Gerald and his admonishment from the preacher, “not to think bad thoughts … that’s what lets the demons in.” I respect most organized religions. I should say that I respect the rights of people to worship what they see fit.

A couple things do trouble me about the blurred line between the paranormal and the supernatural. David Paulides’ research in his Missing 411 books and the phenomena, of unexplained disappearances from state and national parks, volume IV, makes a statistical correlation between state and national parks that contain the name “devil” or “diablo,” and significantly greater chances for hikers, campers, and hunters to vanish. Paulides, as a consummate statistician offers facts that support the supposition that there is a negative or demonic component at play that somehow ties the devil names to statistically higher incidents of abduction.

Because ETs come in such a wide variety, it makes sense that more than a single species of extraterrestrial visits earth. All are probably highly evolved and intellectually superior to human beings. However, advanced intellect and advanced ethics are different animals and may not necessarily run on parallel tracks. A species of beings could evolve in science, math and all matter of learned subjects and not be ethical or moral outside their group.

Consider the Nazi culture from the second world war. The Nazis promoted discipline, learning, and saw themselves as an advanced race. Arian superiority was a myth of course. There is no denying they were a regimented and intelligent culture. But their ethics, empathy and morality did not progress and suffered from a philosophy that discouraged kindness and civility toward those they considered inferior. Anyone not Arian was inferior to some degree. For all their technological advancements their ethics did not keep pace. Their effort to advance intellectually was inhibited by their bigotry, expelling some of their nation’s greatest minds because they did not fit the Arian mold. Just because a group, religion, society or alien civilization is highly intelligent, it does not necessarily mean they treat others ethically.

There could be some very evil but highly-evolved beings out there. It’s a horrible thought that suggests the need for spiritual protection.

Again, I admit there may likely be a spiritual component to all of this. I have had letters from others who tell me I can avoid an encounter through prayer. Prayer may provide effective protection against one alien species but not another. If that’s true I couldn’t begin to understand why.

I respect Suzie’s opinion but disagree with her conclusions. My cousin Gerald’s misery comes to mind. I do not believe the creatures I encountered were from the spiritual realm. The thing they traveled in was 100% solid nuts and bolts and real in this plane of existence. I also can’t rule out that the ship itself wasn’t a living sentient organism as another reader suggested. Especially since they can control our perception.

As I’ve said before, my attitude about my abduction has softened somewhat over the years. I’ve let go of the anger. I believe if I could speak with them today their attitude would be, “No hard feelings, just doing my job.” I don’t think what was done to us was done out of malice. I think our injuries were collateral damage.

There’s the matter of the other human captives we saw aboard this craft. What happened to them? They were a mixed bag of men, women, and children.

My intuition tells me it did not end as well for them. When that triangle went up in the air and disappeared, Toby and I were alone in the woods. Where did those people go? Were they dropped off somewhere? Were they together as one group or were they random individuals kidnapped like us?

It is called survivor guilt. I still wonder what became of them. Why were we fortunate and kicked out the door but they continued their ride into possible oblivion? It takes me back to my friend Toby’s question in 1977, “Why us?”

From the book Devils Den – The Reckoning by Terry Lovelace 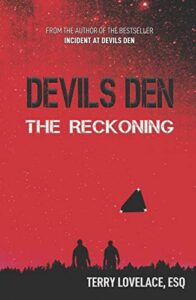 Get the book on Amazon

Terry Lovelace is a native St. Louis Missouri. After high school in 1973, he enlisted in the United States Air Force as the Vietnam war was winding down. He was trained as a medic/EMT and served six years on active duty from 1973 to 1979.

In 1977, he and a coworker were abducted while wilderness camping at Devils Den State Park in NW Arkansas. For fear of damage to his legal career and the loss of respect among his peers, Terry and his wife never disclosed what happened in 1977.

Terry retired from state government in 2012. After enduring forty years of screaming nightmares he no longer feared damage to his legal career and decided to make a full and candid disclosure. The discovery of an alien implant in his leg during a routine x-ray was the true catalyst to write and speak candidly about his abduction experience from an Arkansas state park. Copies of the original x-rays are provided during his presentation.

When he returned to civilian life Terry completed a bachelor’s degree in Psychology cum laude at Park University. He earned a Juris Doctor at Western Michigan School of Law and is also a member of the American College of Health Care Executives. He has been admitted to the bar in Michigan, Vermont and the U.S. Territory of American Samoa. He is also admitted to practice in Federal District Courts in the Eastern and Western Districts of Michigan, and the United States Court of Appeals for the 6th Circuit. In private practice Terry handled civil litigation and criminal defense cases. As a public servant he served as a Felony Prosecutor, General Counsel for LBJ Tropical Medical Center and retired from the State of Vermont as an Assistant Attorney General as State’s Attorney for Vermont’s Board of Medical Practice.

After a fall and a visit to the emergency room in 2012 a routine x-ray to his leg discovered two anomalous objects. The knowledge of these foreign bodies embedded in his body opened the door to horrific memories that had been nearly forgotten. Nightmares from 1977 returned. It was the discovery of these implants and the nightmares that were the catalyst to publish Incident at Devils Den and speak openly.

Alexis Brooks is the editor-in-chief of Higher Journeys, an award-winning talk show host, #1 best-selling author, and international speaker covering metaphysics, spirituality and personal transformation. Her work explores consciousness, human potential, and the deeper characteristics of reality from a transcendental perspective and her approach to these subjects have been described by many as “clear and easy to understand” in covering an otherwise complex and esoteric subject matter. Alexis' mantra: If you dare explore the mystery, Universe will more than meet you half way!
«Previous Post
Spiritual Resolutions – Set Your Intention and Make a Plan!»Next Post
Julia Cannon on How to Become Your Own Channel in 2021