The World According to Dick Gregory

Alexis sits down with the legendary activist and comedian for an intimate and revealing conversation done  on-location in San Francisco, California

While in San Francisco for the New Living Expo I had the distinct pleasure of spending some time with social activist, nutritionist, author and comedian Dick Gregory.  Just one day prior to this interview, he was on the Arsenio Hall show in Los Angeles, bringing the audience to their feet.  The following day, he spoke at the New Living Expo in a suburb of San Francisco discussing the world from his perspective, equally mesmerizing a packed house and consistently getting applause and praise.

After all the hoopla had died down and we were able to steal away for our interview, this legendary and outspoken man of truth gave me what could only be described as “classic Dick Gregory.”  He shared a host of insights on a range of subjects and a slant on each that will give all listeners pause for thought!

Included in the topics he discussed were: What really happened with Trayvon Martin; the dynamics of mind control;  the pre-meditated and staged beating of Rodney King; the Indigo revolution and the children of this 5th world; the heroine epidemic in the U.S., particularly in remote parts of the country like Vermont, Henry Kissinger’s “useless eaters”; Bill Gates take on eugenics and vaccinations; the mechanisms used to control human behavior.  The actual discovery of DNA, and much more!

This is quintessential Dick Gregory.  To say he doesn’t sugar coat a thing would be an understatement.  Still, despite all of his explanations about the hideous behavior man has been immersed in and subject to, for so many years, he still feels that all is not lost, otherwise he wouldn’t be sharing these insights with the world.  But his plea is that we wake up and wake up fast.  Don’t hit the snooze button.  We can’t afford it anymore.  The moment we begin seeing our world for all that it is and has been, the sooner we may find ourselves in a better place, both internally and externally. 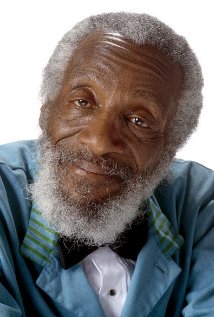 Dick Gregory entered the national comedy scene in 1961 when Chicago’s Playboy Club (as a direct request from publisher Hugh Hefner) booked him as a replacement for white comedian, “Professor” Irwin Corey. Until then Gregory had worked mostly at small clubs with predominantly black audiences (he met his wife, Lillian Smith, at one such club). Such clubs paid comedians an average of five dollars per night; thus Gregory also held a day job as a postal employee. His tenure as a replacement for Corey was so successful — at one performance he won over an audience that included southern white convention goers — that the Playboy Club offered him a contract extension from several weeks to three years. By 1962 Gregory had become a nationally known headline performer, selling out nightclubs, making numerous national television appearances, and recording popular comedy albums.

It’s important to note that no biography of Gregory would be complete without mentioning that he and his beloved wife, Lil, had ten kids who have become highly respected members of the national community in a variety of fields. They are: Michele, Lynne, Pamela, Paula, Stephanie (aka Xenobia), Gregory, Christian, Miss, Ayanna and Yohance. The Gregory’s had one child who died at birth but they have shared 49 years of historic moments, selfless dedication and tremendous personal love.

Gregory began performing comedy in the mid-1950s while serving in the army.
(See Black sin the Military). Drafted in 1954 while attending Southern Illinois University at Carbondale on a track scholarship, Gregory briefly returned to the university after his discharge in 1956, but left without a degree because he felt that the university “didn’t want me to study, they wanted me to run.” In the hopes of performing comedy professionally, he moved to Chicago, where he became part of a new generation of black comedians that included Nipsey Russell, Bill Cosby, and Godfrey Cambridge. These comedians broke with the minstrel tradition, which presented stereotypical black characters. Gregory, whose style was detached, ironic, and satirical, came to be called the “Black Mort Sahl” after the popular white social satirist. Friends of Gregory have always referred to Mort Sahl as the “White Dick Gregory.” Gregory drew on current events, especially the racial issues, for much of his material: “Segregation is not all bad. Have you ever heard of a collision where the people in the back of the bus got hurt?”

From an early age, Gregory demonstrated a strong sense of social justice. While a student at Sumner High School in St. Louis he led a March protesting Segregated schools. Later, inspired by the work of leaders such as Dr. Martin Luther King Jr., and organizations such as the Student Nonviolent Coordinating Committee (SNCC), Gregory took part in the Civil Rights Movement and used his celebrity status to draw attention to such issues as segregation and disfranchisement. When local Mississippi governments stopped distributing Federal food surpluses to poor blacks in areas where SNCC was encouraging voter registration, Gregory chartered a plane to bring in several tons of food. He participated in SNCC’s voter registration drives and in sit-ins to protest segregation, most notably at a restaurant franchise in downtown Atlanta, Georgia. Only later did Gregory disclose that he held stock in the chain.

Gregory’s autobiography, Nigger, was published in 1963 prior to The assassination of President Kennedy, and became the number one best-selling book in America. Over the decades it has sold in excess of seven million copies. His choice for the title was explained in the forward, where Dick Gregory wrote a note to his mother. “Whenever you hear the word ‘Nigger’,” he said, “you’ll know their advertising my book.”

Through the 1960s, Gregory spent more time on social issues and less time on performing. He participated in marches and parades to support a range of causes, including opposition to the Vietnam War, world hunger, and drug abuse. In addition, Gregory fasted in protest more than 60 times, once in Iran, where he fasted and prayed in an effort to urge the Ayatollah Khomeini to release American embassy staff who had been taken hostage. The Iranian refusal to release the hostages did not decrease the depth of Gregory’s commitment; he weighed only 97 lbs when he left Iran.

Gregory demonstrated his commitment to confronting the entrenched political powers by opposing Richard J. Daley in Chicago’s 1966 mayoral election. He ran for president in 1968 as a write-in candidate for the Freedom and Peace Party, a splinter group of the Peace and Freedom Party and received 1.5 million votes. Democratic candidate Hubert Humphrey lost the election to Republican Richard Nixon by 510,000 votes, and many believe Humphrey would have won had Gregory not run. After the assassinations of King, President John F. Kennedy, and Robert Kennedy, Gregory became increasingly convinced of the existence of political conspiracies. Gregory wrote books such as Code Name Zorro: The Murder of Martin Luther King Jr. (1971) with Mark Lane, world famous author, attorney and documentary filmmaker, whose findings published in the best-selling 1966 book Rush To Judgment Gregory credited with reversing the nation’s opinion on who assassinated the president and the facts which contradicted the official government version contained in the Warren Report. Lane’s book contained answers and facts, which Gregory has espoused in Numerous lectures from then until now. Lane and Gregory have been best friends, co-authors and have lectured together for over 40 years and both livein Washington D.C. Gregory and Lane’s book on the assassination of Dr. King was recently released under another title, Murder In Memphis, as a trade paperback.

Gregory’s activism continued into the 1990s. In response to published allegations that the Central Intelligence Agency (CIA) had supplied cocaine to predominantly African American areas in Los Angeles, thus spurring the crack epidemic, Gregory protested at CIA headquarters and was arrested. In 1992 he began a program called ?Campaign for Human Dignity? to fight crime in St. Louis neighborhoods.

In 1973, the year he released his comedy album Caught in the Act, Gregory moved with his family to Plymouth, Massachusetts, where he developed an interest in vegetarianism and became a nutritional consultant. In 1984 he founded Health Enterprises, Inc., a company that distributed weight loss products. In 1987 Gregory introduced the Slim-Safe Bahamian Diet, a powdered diet mix, which was immensely profitable. Economic losses caused in part by conflicts with his business partners led to his eviction from his home in 1992. Gregory remained active, however, and in 1996 returned to the stage in his critically acclaimed one-man show, Dick Gregory Live! The reviews of Gregory’s show compared him to the greatest stand-ups in the history of Broadway.

In 1998 Gregory spoke at the celebration of the birthday of Dr. Martin Luther King, Jr. and President Clinton were in attendance. Not long after that, the President told Gregory’s long-time friend and PR. Consultant, Steve Jaffe, “I love Dick Gregory, he is one of the funniest people on the planet.” They spoke of how Gregory had made a comment on Dr. King’s birthday that broke everyone into laughter, when he noted that the President made Speaker Newt Gingrich ride “in the back of the plane,” on an Air Force One trip overseas. In 2001, Gregory announced to the world that he had been diagnosed with a rare form of Cancer. He refused traditional medical treatment – chemotherapy –and with the assistance of some of the finest minds in alternative medicine, put together a regimen of a variety of diet, vitamins, exercise, and modern devices not even known to the public, which ultimately resulted in his reversing the trend of the Cancer to the point where today he is 100% Cancer free.

Gregory’s going public with his diagnosis has helped millions of his fans around the world to understand what Cancer specialists have been trying to explain for decades, which is that “Cancer is curable.” Gregory was honored recently at the Kennedy Center in Washington D.C., by a sold out house and a tribute hosted by Bill Cosby, with special tributes by Mrs. Martin Luther King Jr., Stevie Wonder, Isaac Hayes, Cicely Tyson, Mark Lane, Marion Barry and many more.

His most recent book, Callus On My Soul, (Longstreet Press, Atlanta, Ga.) which became a best-seller within weeks of publication, is an autobiography that updates his earlier autobiography (Nigger), because as Dick says, “I’ve lived long enough to need two autobiographies which is fine with me. I’m looking forward to writing the third and fourth volumes as well.”

In 2001, Gregory escaped death once again when a massive tree fell on his car in a storm in Washington D.C. crushing it completely, causing him to have to be extricated from the car by emergency crews. One witness said, “I knew the driver and his passengers had died when I saw the tree fall.” Gregory said, “I knew that God had more work for me to do when I saw the tree falling. ” He saved his own life by driving into the oncoming lanes of traffic. The word of the accident circulated the globe immediately in the media, underscoring the power, influence, and support that Gregory has earned from people of all nations.

In Conversation with the Producer of Thrive II Kimberly Carter Gamble

Get Your “DIY Psychic” On! Tips and Tricks with Psychic Medium John Holland