The Real Exorcist Producer says this film was driven by an urgent need to Heal!

The reality of the supernatural is still considered a taboo subject in many circles of “polite company.”

Though the anecdotes of individuals who can “read minds” (telepathy), remote view people and places, and even exorcise so-called “possessed” individuals are replete throughout history and multiple cultures, it’s still largely dismissed as fantastical fiction.

In the soon to be released film, THE REAL EXORCIST, the supernatural is the overarching theme, but not just for the sake of satisfying thrill seekers who love the horror genre.

In this interview with the film’s producer Yoichi Utebi, he explains that the central focus of the film was to illuminate the reality of psychic and supernatural abilities as a means by which to help individuals with life challenges. Themes such as suicide, bullying, depression, peer pressure and more are highlighted with individuals who are marred by these challenges. But when the film’s lead character, “Sayuri” recognizes her own innate supernatural abilities, she decides to use her “powers” to assist those most desperately in need.

🎬 About “The Real Exorcist” 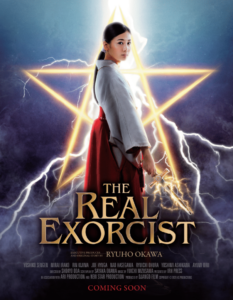 Sayuri works as a waitress at Extra, a small coffee shop in Tokyo where regular customers enjoy the owner’s authentic coffee as well as “Free Consultations”, as the storefront sign says. Sayuri uses her spiritual powers to help those who are troubled by supernatural phenomena, including a group of high school girls who encounter a haunting ghost and others who suffer from family problems. Through her unique consultations, Sayuri touches the hearts of her customers and helps them by showing the truths of the invisible world and the state of mind that determines our happiness or unhappiness in life.

Go to the movie’s website to learn more about the film and it’s release!

Alexis Brooks is the editor-in-chief of Higher Journeys, an award-winning talk show host, #1 best-selling author, and international speaker covering metaphysics, spirituality and personal transformation. Her work explores consciousness, human potential, and the deeper characteristics of reality from a transcendental perspective and her approach to these subjects have been described by many as “clear and easy to understand” in covering an otherwise complex and esoteric subject matter. Alexis' mantra: If you dare explore the mystery, Universe will more than meet you half way!
«Previous Post
Steven Halpern – Use the RIGHT Sound for Immune System Health»Next Post
Cynthia Sue Larson – The Mandela Effect in 2020: What’s New?