The Quantum Mechanics of Fate 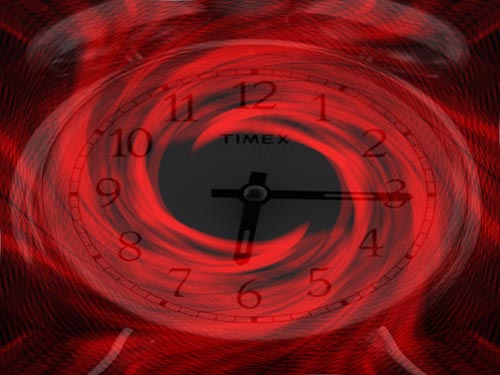 How time travel might explain some of science’s biggest problems.

The objective world simply is, it does not happen,

wrote mathematician and physicist Hermann Weyl in 1949. From his point of view, the universe is laid out in time as surely as it is laid out in space. Time does not pass, and the past and future are as real as the present. If your common sense rebels against this idea, it is probably for a single reason: the arrow of causality. Events in the past cause events in the present which cause events in the future. If time really is like space, then shouldn’t events from the future influence the present and past, too?

They actually might. Physicists as renowned as John Wheeler, Richard Feynman, Dennis Sciama, and Yakir Aharonov have speculated that causality is a two-headed arrow and the future might influence the past. Today, the leading advocate of this position is Huw Price, a University of Cambridge philosopher who specializes in the physics of time. “The answer to the question, ‘Could the world be such that we do have a limited amount of control over the past,’ ” Price says, “is yes.” What’s more, Price and others argue that the evidence for such control has been staring at us for more than half a century.

That evidence, they say, is something called entanglement, a signature feature of quantum mechanics. The word “entanglement” has the same connotations as a romantic entanglement: a special, and potentially troublesome, relationship. Entangled particles start off in close proximity when they are produced in the laboratory. Then, when they are separated, they behave like a pair of magic dice. You can “roll” one in Las Vegas (or make a measurement on it), your friend can roll the other in Atlantic City, N.J., and each die will land on a random side. But whatever those two sides are, they will have a consistent relationship to each other: They could be identical, for example, or always differ by one. If you ever saw this happen, you might assume the dice were loaded or fixed before they were rolled. But no crooked dice could behave this way. After all, the Atlantic City die changes its behavior depending on what is going on with the Las Vegas die and vice versa, even if you roll them at the same moment.

Causality is a two-headed arrow and the future might influence the past.

The standard interpretation of entanglement is that there is some kind of instant communication happening between the two particles. Any communication between them would have to travel the intervening distance instantaneously—that is, infinitely fast. That is plainly faster than light, a speed of communication prohibited by the theory of relativity. According to Einstein, nothing at all should be able to do that, leading him to think that some new physics must be operating, beyond the scope of quantum mechanics itself.

Suppose it is not the case that the particles (or dice) communicate instantaneously with each other, and it is also not the case  that their values were fixed in advance. There seem to be no options remaining. But here Price asks us to consider the impossible: that doing something to either of the entangled particles causes effects which travel backward in time to the point in the past when the two particles were close together and interacting strongly. At that point, information from the future is exchanged, each particle alters the behavior of its partner, and these effects then carry forward into the future again. There is no need for instantaneous communication, and no violation of relativity.

To think about this problem, consider the most prosaic of objects: a popsicle stick. The stick will bend or buckle, depending on the pressure you apply to both ends. Now imagine a popsicle stick whose ends are separated in time, rather than in space. The same logic should apply: What happens to the middle of the stick will depend on the situation at each end. For entangled particles, the endpoints happen to be in time. At one end is the moment they were created next to each other in the laboratory, and at the other end is the moment when they are far apart and a measurement is taken. Their behavior at some intermediate time depends on information flowing from both past and future.

As with so much else in quantum mechanics, this concept of retrocausality is limited in scope. Only in certain circumstances can we see the future influence the past. Although individual particle processes can move backward or forward in time, the universe as a whole is skewed in the forward direction, because its past endpoint was highly ordered, and its future endpoint is highly disordered. Our mortality is this asymmetry in microcosm.

So is our sensation of time’s passage and, by extension, of free will. We have the feeling that the past is fixed because we have records of it, created as the universe slid from its highly ordered origins toward a messier future. We have no such records of the future. In fact, you could define the future as “that we know not of.” And one of the many things we don’t know about the future is what we ourselves will do in it. We acquire this knowledge only in the act of living. Our decisions might be preordained, but we still have to go through the paces, and that is what gives our volition meaning.

Alexis Brooks is the editor-in-chief of Higher Journeys, an award-winning talk show host, #1 best-selling author, and international speaker covering metaphysics, spirituality and personal transformation. Her work explores consciousness, human potential, and the deeper characteristics of reality from a transcendental perspective and her approach to these subjects have been described by many as “clear and easy to understand” in covering an otherwise complex and esoteric subject matter. Alexis' mantra: If you dare explore the mystery, Universe will more than meet you half way!
«Previous Post
Group supports those who’ve had NDE’s»Next Post
Animal Reincarnation & the “Walk Ins”