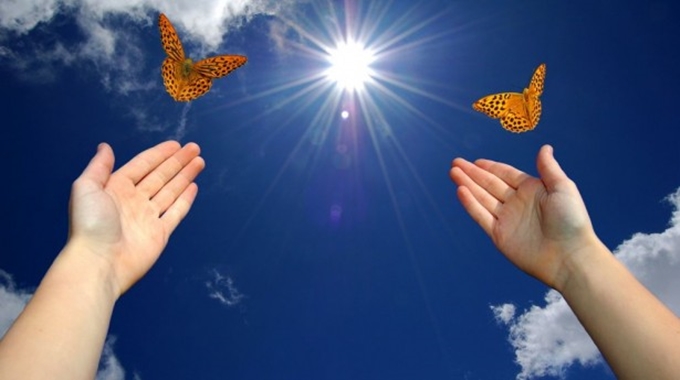 Are “butterfly people” one of many phenomena indicative of a “new world” and will it be the “new children” who show us how to see this world with new eyes?

Dr. P.M.H. Atwater’s book, Children of the Fifth World left me riveted.  This lucid and somewhat irreverent volume spends much of its time covering a new breed of humans; children who she and many others feel, embodies a new kind of human persona.  They understand variables about the human and spiritual experience leaps and bounds above others.  They are themselves irreverent, brilliant, restless and creative beyond imagination!  And yes, they know the “paranormal.”  They are psychic, see into the imaginal realms, and traverse them regularly, both in the dream state and right here on earth!

Atwater doesn’t necessarily spend a great deal of time discussing paranormal and psychic experience in her book, save for putting it into a necessary context as it relates to these new kids.  But she touched on something very briefly at the back of her book, which struck me with a curiosity – I had to explore it, just a little.  And I’ll tell you why I felt compelled to do so, shortly.

“The Butterfly People” is a term that was brought up in a December 2011 article written by Todd C. Frankel who writes for the St. Louis Post Dispatch, in the aftermath of the May 2011 Joplin, Missouri tornado that ripped through the area, killing and injuring hundreds and destroying countless property and land.  Atwater briefly summarizes his article in her book.

The Butterfly People of Joplin chronicles the stories of dozens of kids who claim emphatically that they saw these beings, winged people, whose appearance matched that of a butterfly, in and around the tornado.  Many of these kids (and some of the adults who heard these incredible stories) called them guardian angels – there to protect some people from harm and in some cases to take them “up into the sky.”  The article although somewhat guarded in how these stories are portrayed, repeatedly mentions different versions of the children’s accounts, highlighting that many of the children who claimed to have seen these butterfly beings were in the age range of 3-4 years old.  I suppose this would take the legitimacy of such a fanciful story off the hook, since kids in this range are also the ones who most claim to have “imaginary friends.”

But Atwater frames it another way saying, “What was once called the paranormal is happening so often and everywhere that it is obvious the veil separating dimensions of reality is lifting.”  She speaks of the Butterfly people phenomenon in Joplin as a case-in-point.

But here’s another one that will both flip you on your ear and honestly drive you to give serious pause for thought about the reality of these and a myriad of other beings – from different dimensions, different realities and made of different stuff!  And this is why “The Butterfly People” snippet that Atwater included in her book got my attention…

In 2005, Dr. Mitchell Gibson a medical doctor in the area of forensic psychiatry who left his practice over a decade ago to focus on a more spiritual approach to healing gave a talk at the Seventh International Conference on Science and Consciousness.  He delivered an eye-opening presentation that included a phenomenon curiously similar to that of the butterfly people described in Joplin.

In part of his talk he focused on what he calls, “the hidden universe” – a dimension that is not usually visible to the normal human but occasionally manifests depending on the circumstances present.  He talks of a variety of beings that can emerge through this realm and present themselves to us.

He gives an account of what could be described as a “butterfly being” who appeared to the family of a recently deceased woman.  It was reported by her family that the being spoke with them in excess of six hours and then concluded by saying that it was there to collect the soul of the woman and take her back to “heaven.”

The entity described that it was from “another dimension” and that it was made of a different kind of matter.

Gibson, who personally met with this family, was presented with a photo of this “butterfly being,” taken by the family of the woman who’d passed.  He asked them not to share this photo directly with the public for fear they would get the wrong kind of attention for it and most probably be unduly ridiculed.

Gibson, although stunned by the image, having never seen anything quite like this before, believes that the photo is authentic, underscoring that this family came across as very “simple” folks, not likely capable of what could be construed as a sophisticated photo manipulation.

He reports that a family member who spoke with him about the incident was in tears.  “She wanted to have some explanation,” he said.

In the presentation he describes this entity as having wings like a butterfly but the head of a human (blond hair, mustache, et al).  Sound utterly crazy?  Perhaps.  But again, something is going on here that we are just beginning to look at.  A reality that may seem clearly out of our comfort zone, but as Atwater says, the veils are lifting and these kinds of experiences seem to be mounting up by the hundreds (if not more) to show us that we are embedded in a reality far more diverse and infinite than we could have ever fathomed.  Apparently the new kids know this!  Whether they are from Joplin, Missouri, or Gauteng, China – or anywhere in between, these children know and are being taught that this is natural – normal and real!

Atwater even says that according to her research, these kids are attending what she calls “night school”; a “place” within the imaginal realm, typically attended at night and in the dream state where universal learning takes place.

Atwater told me about an incident she was personally witness to.  She was in a large mall doing some shopping and happened to be walking down one of the long side corridors in pace with a mother and her son.  At the other end of the corridor was another little boy who was walking toward them with his parents.  When both boys’ eyes locked, they suddenly and urgently ran toward each other, gave a large embrace and called each other by name.  The parents (and Atwater) stood shocked as they spoke of having been “in class” the night before as they began discussing the class assignment that they had just been given.  Atwater says both these boys appeared to be around the age of 6 or so.  After watching and listening to the boy’s discussion, Atwater learned that while the mother and young son were local to the area, the other boy, with his parents were visiting as tourists and had not been there before.  Ergo, the two boys had never met – at least not in this dimension!  As Atwater describes it, these are two kids who apparently met in the Imaginal dimension (not to be confused with the imaginary world of make-believe).  The imaginal is another “place” where many of us go to learn, experience and bring back fantastic information.  Apparently that’s how these boys knew each other.  I asked Atwater about the reaction of these kids’ parents while watching their sons.  She said that they obviously let the boys talk, but were visibly flabbergasted.

As fantastical as these experiences, dimensions, beings, realities seem to be – I suppose they are mere relative phenomena that will one day integrate into a shared Universal reality that we will all acknowledge, embrace and truly know!

If you haven’t already, I urge you to listen to my incredible discussion with Dr. P.M.H. Atwaterabout these new children and how, now more than ever, they are committed to ushering us all through The Shift and the unprecedented times for which we are living!

This article was originally posted on CLN in September of 2013

Alexis Brooks is the editor-in-chief of Higher Journeys, an award-winning talk show host, #1 best-selling author, and international speaker covering metaphysics, spirituality and personal transformation. Her work explores consciousness, human potential, and the deeper characteristics of reality from a transcendental perspective and her approach to these subjects have been described by many as “clear and easy to understand” in covering an otherwise complex and esoteric subject matter. Alexis' mantra: If you dare explore the mystery, Universe will more than meet you half way!
«Previous Post
Is it Socially Correct to Defy Expectation?»Next Post
Shadow People and the Djinn – A Conversation with Rosemary Ellen Guiley