Self-Initiated Out of Body Experience 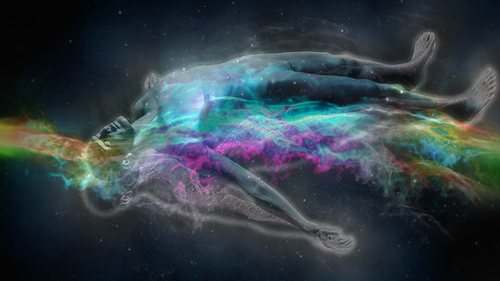 This is a term that my friend and colleague, OBE expert William Buhlman uses to describe a process by which an individual can encourage the consciousness to separate from the physical form, and one that he touts as a necessary process to help in one’s spiritual development.

I’ve spoken to William many times about the benefits of self-initiated OBE’s, and the one he’s consistently illuminated is that first-hand experience with regular OBE’s can literally annihilate our fear of physical death. He’s told stories of his initial sojourns into the “out of body” realm in which he met his deceased mother and uncle, had detailed conversations with them and then returned to his body with a renewed sense of faith, not only that they continue to live but so will we!

Our belief that death is an end as many have been taught is absolutely untrue, he says. In fact we’ve discussed the whole idea of belief (the acceptance of some idea that was thrust upon an individual at some point in their life) is no longer an option, whereby knowing has now taken its place. This, he says is what self-initiated out of body experience has to offer – a knowing that we continue after our physical death.

I encourage you to listen to several interviews I’ve done with William which you can find at the links below, as we discuss this provocative and enlightening subject.

As well, here is a great piece I recently found on methods that can be used to induce an out of body experience. William has his own that he’s developed, but here are several others that may aid in your journey beyond the body…

Firstly, it is important to say that before attempting to use any of the Techniques for inducing an Out of Body Experience, you should be fully-relaxed in mind and body. Out-of-Body-Experience.info contains lots of information and tips in order to reach the desired state of mind.

Now, that said, here are the Seven Best Techniques for Inducing an Out of Body Experience:

1. Inducing an Out of Body Experience Using The Rope Technique

The Rope Projection technique is said to have been devised by Robert Bruce, one of the foremost figures in the world of Astral Projection. The idea was for a method of projection that would be effective for people who were without sight, and therefore relies more on tactile experience than visual memories. The technique hinges around an imaginary rope that hangs above you from the ceiling.

As you lie on your bed, you imagine the rope hanging down towards you, and what you do is visualize yourself (or rather, your Astral Self) taking hold of the rope, and pulling yourself up the rope, one hand at a time, all the while concentrating on the sensations as you climb upwards. Be aware of the feeling of the rope against your hands, and the motion of your body as you pull yourself up from your bed, and concentrating also on the feelings of your arms slowly but surely pulling yourself upwards.

The Rope Technique is extraordinarily successful at inducing an Out of Body Experience, even in people who have struggled for a long time to see any results. Quite quickly, a feeling of fairly intense vertigo is experienced, and projection is generally instantaneous, provided the student has kept themselves calm and relaxed throughout.

2. Out of Body Experience using the Ladder Technique

Occasionally, people have difficulty with the rope technique for astral projection, as they just don’t feel that their imaginary hands and arms are strong enough to hold them and pull them up the rope. This may sound strange to you, but it is a phenomenon more common than you would think!

In this instance, a ladder may be imagined hanging from the ceiling, instead, which has the benefit of allowing the would-be Astral Projector to use his or her feet, as well as the hands.

All other aspects of this method remain the same as with the Rope Projection Technique.

>>Listen to three interviews with Alexis and William Buhlman on OBE’s, here, here, and here.<<

3. Out of Body Experience with the Point Shift Method

The next two techniques for Out of Body Experiences are slightly more traditional and also more difficult for many people. However, some people take to these kinds of Astral Projection techniques like a duck to water, and it is certainly good to have as many different methods under your belt as possible.

The point shift method involves becoming intensely aware of your own body, and then mapping out in your imagination where everything in your room is, in relation to you and each other. It is for this reason that it requires quite a lot of concentration.

Once this stage has been reached, you then can feel yourself float, just a few inches, at first, and then visualise all of your surroundings from that new perspective. The idea is to feel as if you have already projected out of you body, and keeping your awareness of where you are and what you visualize from the view-point of your imaginary self!

Finally, you slowly rise from your physical body. This takes what can only be described as a very relaxed form of will-power. Some force is necessary, but you must not allow your body to become tense. Congratulations, you have projected, and once this method of Astral Projection is mastered, you will find it far easier to project under almost any circumstances.

Alexis Brooks is the editor-in-chief of Higher Journeys, an award-winning talk show host, #1 best-selling author, and international speaker covering metaphysics, spirituality and personal transformation. Her work explores consciousness, human potential, and the deeper characteristics of reality from a transcendental perspective and her approach to these subjects have been described by many as “clear and easy to understand” in covering an otherwise complex and esoteric subject matter. Alexis' mantra: If you dare explore the mystery, Universe will more than meet you half way!
«Previous Post
When Life Gives You Lemons – Drink Lemon Water!»Next Post
The Shadow and Light of Hollywood Film with Randall Libero (Replay)