On the three year anniversary of his passing, we get an inside look at the creative side of remote viewing pioneer Ingo Swann by someone who knew him well.

For anyone who has dared look beneath the surface of what we call reality – with all of it’s inexplicable elements and metaphysical undertones, you’ve no doubt stumbled across the name of Ingo Swann.

Swann, considered “The father of remote viewing,” and super psychic (although he loathed the label bestowed upon him), passed away three years ago today (February 1st 2013). And as I surmised when I wrote my initial tribute article about him, his work and legacy would continue to resonate with many who call themselves researchers and explorers of the true nature of reality.

One such individual is Paul H. Smith – a protege of Swann’s and a consciousness voyager in the truest sense.

Paul was trained by Ingo in the early to mid 1980’s in remote viewing while working with the military’s “Star Gate Remote Viewing Program.”

Not only was Paul afforded a birds-eye view of remote viewing by someone who brought true legitimacy to the modality, but he also got a glimpse of the man, the creator, the artist who was able to bring such a feat to life – and express the experience on levels unknown to most.

Three years ago today, the creator of remote viewing, Ingo Swann, moved beyond his mortal body and, as will all of us in the end, entered an eternal world of infinite possibility. To commemorate that sad but affirming transition, I am celebrating Ingo’s life today by posting here the almost transcendent experience I had when Ingo treated me and my fellow Star Gate remote viewing students to our first look at Ingo’s masterpiece, Millennium. It happened on February 21, 1984, a Tuesday. On our first day after arriving in New York for remote viewing training under the contract the U.S. Army had signed with SRI-International, Ingo had invited the four of us (Charlene Shufelt, Ed Dames, Bill Ray, and myself) down to the building he owned in Manhattan’s Bowery.  The story picks up from there.

“Come, let’s go down to the studio,” Ingo called, as he herded us into the tight confines of the freight elevator.  The lift hummed loudly as it lowered us down past each floor, stopping finally below ground level.  Ingo opened the elevator door with a flourish.  “I want to show you Millennium.”

Ingo’s building had a main basement, which we were now entering, plus a sub-basement in which he stored his large collection of files and reference material.  The main basement was at that time set up exclusively as a studio.  The flooring was dark, heavily-varnished boards that were cupped by years of heavy use and moist air.  The walls were dingy and patched.  There was the detritus of art everywhere – canvas stretchers, half-finished paintings, assorted tools and objects for reference, more dilapidated furniture.  Impregnating everything was the smell of turpentine and linseed oil – fragrant odors to someone who wanted to create from their imaginations visions for others to experience.   “Millennium” was one of those visions, and it awaited us at far end of the studio, boldly swathed in light.

It was easy to become lost in the painting.  It was huge – the largest I had at the time ever seen, and only since dwarfed in my mind by an immense Bierstadt I later saw at the National Gallery in Washington.   “Millennium” was a triptych – painted on three canvas panels, each taller than me, and probably half again as long as its height – about 27 feet long, all told.

As I took it in, I was not conscious of the timbers that anchored it from behind, so it seemed almost to float a foot or so above the floor.  The side panels canted slightly inward, seeming to embrace me.  A wooden bench sat at a comfortable distance from the painting, where Ingo bade us sit.  He then turned out all the lights in room but those flooding the painting and raised the volume on his stereo to play Kitaro’s weighty Silk Road Suite.

The painting contained nothing but ocean and sky.  From where we sat, I couldn’t take it all in at once.  Instead, when I looked forward my peripheral vision was filled by the massive waves that curled in from both edges of the panels on either side.  These waves seemed to loom above us, while the ones in the foreground merely seethed and tossed.  Towering thunderheads ringed the distant skies.  In the middle distance, though, clouds broke and the seas began to calm.  Centered in the horizon a sun blazed a golden pathway across the serene ocean between a canyon of clouds towards us, blocked finally by the tossing waves that lay immediately before our eyes. Intruding into the picture were mysterious lights – pearl-like strings of iridescence, clusters of glowing orbs, with a hint of otherworldly-origin about them.

Somehow it all expressed the inchoate wonder of what we had embarked upon with our remote viewing.  I’ve since gone to see the painting many times.   I once even watched anxiously as Ingo made a few last additions to it with paint and brush while tipsy from several glasses of wine.  And I helped him put its final varnish coat on.  But, strangely, at the time I never thought to ask him what he was trying to capture with “Millennium.”

The name suggests something Biblical, but Ingo wasn’t religious in any conventional sense of the word.  He had spent time among my own Mormon people in Salt Lake City.  And he was deeply interested in Catholic reports of appearances of the Blessed Virgin Mary.  But even this came more from a fascination with the paranormal aspects of the events than from anything religious associated with them.

For me, the painting represented both the ponderous things of the universe, and the imponderables of existence.  It brought home, if only imperfectly, the inconceivable power latent in the cosmos, yet revealed hidden knowledge suffusing what we see – things beyond the manifest world which are just as marvelous and, perhaps, just as powerful.

Read the original post here and see an image of “Millennium” and other valuable links. 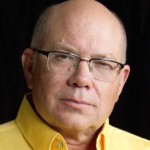 Dr. Paul H. Smith (Major, US Army, ret.) performed his first remote viewing in September 1983 as a new member of what eventually became known as the Star Gate military remote viewing program. (See supporting documents) He learned remote viewing during twelve months of personal training with the legendary Ingo Swann, the originator of remote viewing, and Dr. Harold E. Puthoff, director of the CIA’s (later Department of Defense’s) official remote viewing program at Stanford Research Institute(now SRI-International). Paul went on for additional training with F. Holmes “Skip” Atwater, the founder and longest-serving training and operations officer of the Army’s elite remote viewing unit at Ft. George G. Meade, Maryland. At the end of his training, and already with operational remote viewing experience under his belt, then-Captain Smith was asked to compile and author the Defense Intelligence Agency’s official remote viewing training manual – of which Ingo Swann later said “You’ve done me great honor in taking the time and effort to produce such a comprehensive and accurate document.” (Read the full letter from Ingo Swann).

For another five years (for a total of seven as a military remote viewer), Paul worked as a first-line operational remote viewer, tasked to collect intelligence against foreign threats using the remote viewing discipline. In addition to his intelligence work, he also continued with major training duties, participating extensively in the instruction of every new CRV trainee that joined the unit between 1984 and 1990 — among them Lyn Buchanan, Mel Riley, and David Morehouse, all of whom have gone on to achieve notoriety in the remote viewing field. Paul has the longest experience as a remote viewing methodology instructor of anyone teaching RV publicly today.

«Previous Post
Logic, Imagination and the Re-Entry of the “Whole Human”»Next Post
The New Human with Mary Rodwell