Calling Earth – Glimpses of the Afterlife 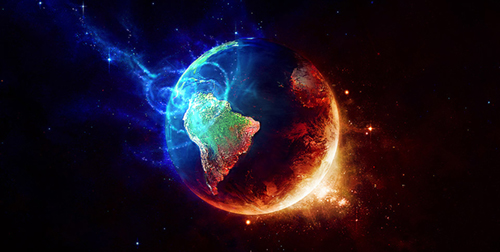 Does the afterlife exist? And if so, will we one day be able to communicate with that realm? For some individuals – both lay people as well as researchers in the elusive field of parapsychology they say  we already can!

The phenomenon of Instrumental Transcommunication or ITC is one method by which some claim that we can bridge the chasm between the here and the hereafter. Inclusive of this approach is what is referred to as Electronic Voice Phenomena or EVP. Both methods involve using devices to pick up voices, or even visual images of the deceased by means of technology.

Several years ago I interviewed paranormal researcher Rosemary Ellen Guiley about the advances in research around this still mysterious phenomenon. In her book, Talking to the Dead which she co-authored with Coast to Coast AM’s George Noory, they lay out a well rounded chronology of how technology has been used to tap the other side, including newly invented devices that claim to deliver spirit voices on-demand.

Guiley who has been a regular experimenter of several real-time EVP devices including one called the “minibox” did an in-studio demonstration prior to going on-air with George Noory for his popular Coast to Coast AM broadcast. During the demonstration Noory asked why there was a need for a lot of background noise. “In order to talk to us, those in another dimension seem to do best when we give them a background of sounds. They’re not using the vocal cords of the living,” states Guiley. The communicators have said that “they manipulate energy on their side and sound on ours.”

Although a provocative theory, the idea of ITC is not as unknown as one might think. Many including inventor Thomas Edison was said to have been working to develop a device that would also allow for the voices of the “deceased” to come through. In the following overview, we take a deeper look at the idea of ITC/EVP in a fascinating documentary entitled, Calling Earth…

ABOUT THE FILM “CALLING EARTH”

Calling Earth probes the puzzling phenomenon of Instrumental Trans-communication — apparent messages from the “other side” received through modern electronic and photographic devices. “ITC” has been well documented by researchers at least as far back as the 1950s when tape recorders first became available to the general public and unexplained voices began to show up in people’s recordings.

When I first became aware of this research in the mid-1990s I was highly skeptical. But the accumulated evidence eventually transformed my doubts into curiosity, and in 2001 I started filming a documentary on the subject. Between 2004 and 2009 I was joined by co-producer Tim Coleman, with whom I traveled across the US and to England, Scotland and Spain, filming various facets of ITC as well as other aspects of modern afterlife research. Tim then went on to complete his own documentary, The Afterlife Investigations, while I continued to produce Calling Earth. My last excursion, in February 2014, took me to the Netherlands, where I spent a week filming an extraordinary young man whose ability to make visual ITC happen under controlled conditions is impressive to say the least.

The notion of an “other side” or an “afterlife” makes no sense from the perspective of modern materialism, just as the notion of a solar system made no sense in Medieval times when the Earth appeared to be the center of things. But our understanding of the natural world has always evolved and expanded as we’ve mustered the courage to follow the evidence where it leads.

Sometimes a simple shift of perspective is all we’ve needed to enlarge our understanding of reality and let our minds comfortably encompass things formerly deemed inexplicable or nonexistent by the academic and ideological gatekeepers of the day. Come the Renaissance, putting the Sun at the center of things transformed our view of our place in the universe. Today, the willingness to consider consciousness as primary and independent — as interactive with the brain rather than somehow being manufactured by it — seems to set the stage for welcoming many so-called paranormal phenomena into the natural order of things. From this perspective, the notion that consciousness might also interact with sensitive electronic equipment may not be as great a stretch as one might imagine.

The director invites viewing, comments and feedback at the OFFICIAL final edited page which you can visit here.

Alexis Brooks is the editor-in-chief of Higher Journeys, an award-winning talk show host, #1 best-selling author, and international speaker covering metaphysics, spirituality and personal transformation. Her work explores consciousness, human potential, and the deeper characteristics of reality from a transcendental perspective and her approach to these subjects have been described by many as “clear and easy to understand” in covering an otherwise complex and esoteric subject matter. Alexis' mantra: If you dare explore the mystery, Universe will more than meet you half way!
«Previous Post
The Last Avatar…And Beyond with Sharron Rose»Next Post
The Zen of 11:11