Darryl Anka – Bashar Wisdom: The True Nature of Time and Us

Channel for Bashar, Darryl Anka shares insights on the true nature of time, the current “shift” and how reality really works.

In the nearly 35 years that channel Darryl Anka has been bringing through empowered messages from the entity known as Bashar, the themes have been constant and unwavering.

But given the exponential shift that many feel our planet is in the midst of, change is the order of the day – especially when it comes to us – the human race.

And speaking of reality and time, the affable entity insists that both are ultimately illusory, merely projections that we determine to be linear as is played out in the 3D.

“…everything exists all at once. We create this structure – this scenario of linear time, in a sense, in order to have a process…It’s kind of like saying you forget who you are in order to have a process of remembering who you are, but from a new point of view,” explained Darryl, whom I had the pleasure of chatting with while on-location at the 17th Annual Conscious Life Expo in Los Angeles in February of this year.

Darryl went on to explain that the physical world and our lives are like a dream that we’re having while we are, and always have been in spirit. In other words – we are spirit having the dream that we believe for the time being to be reality.

This idea is not too dissimilar to that of the ancient peoples of India who believed that reality is truly Maya, roughly translated as “illusion.”

But if this is so, then what is the purpose of an illusory construct? What are we to do within this matrix and most importantly, how can we as a species truly evolve within a construct that is nothing more than an illusion?

These are the questions that Darryl Anka answered with seamless proficiency and ease. And one that he’s completely comfortable with, after sitting side by side for over three decades and counting with the wisdom keeper known as Bashar! 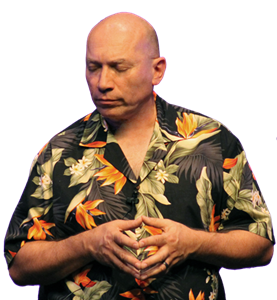 For over 34 years, individuals from all over the globe have made the journey to experience renown channel Darryl Anka as he brings through the remarkable multidimensional being from the future known as Bashar.

Along with Edgar Cayce, Seth, and Abraham-Hicks, the Bashar material has been heralded as some of the most relevant, compelling and dynamic information delivered to the planet to date.

In addition to channeling Bashar, Darryl expresses his creative talents in the forms of writing, directing and producing films through his own production company, Zia Films.

Darryl’s recent documentary, which he wrote, produced and directed, entitled First Contact explores his life as a channel and the messages Bashar shares through him.

Alexis Brooks is the editor-in-chief of Higher Journeys, an award-winning talk show host, #1 best-selling author, and international speaker covering metaphysics, spirituality and personal transformation. Her work explores consciousness, human potential, and the deeper characteristics of reality from a transcendental perspective and her approach to these subjects have been described by many as “clear and easy to understand” in covering an otherwise complex and esoteric subject matter. Alexis' mantra: If you dare explore the mystery, Universe will more than meet you half way!
«Previous Post
Mercury Retrograde 2019 – How to Harness the GIFTS!!»Next Post
Emery Smith – Who He Is and What He Knows (EXCLUSIVE)