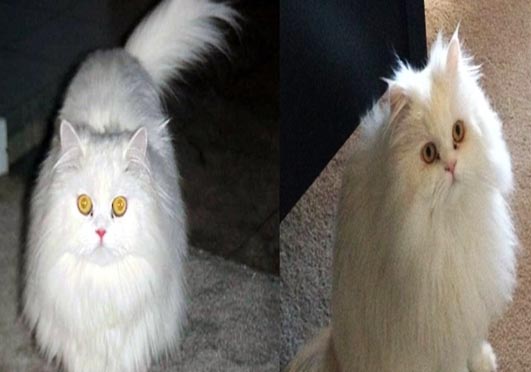 Could a reincarnation begin before a life actually ends?”

The last thing I would’ve expected after our persian cat Paws died on February 18 of 2012 was that he would return in nearly an identical package, or return at all for that matter, complete with physical appearance, personality traits, and memories of his favorite homestead haunts fully in tact.

But that’s what appears to have happened – a reincarnation of Paws, now called Clover Paws, returned to us in the fall of the same year that he’d “died.”

I’ve written about this miraculous account before both online and in my book Conscious Musings, in which I describe all of the curious dimensions this incident brought to life. The components to this perplexing and amazing case have put the subject of reincarnation and more specifically animal reincarnation into clearer focus for me – so much so that I have given a talk on the subject (The Case for Animal Reincarnation) and have discussed it repeatedly during media interviews I’ve done on the subject of consciousness and related subjects. Admittedly, as much as I feel that multiple incarnations, both of humans and our animal companions can happen, I am still quite frankly confounded as to how it all occurs!

Among the strange and curious synchronicities associated with the return of our little kitty was his birthdate (February 17, 2012) and Paws’ death date (February 18, 2012). We’d figured the two events took place merely hours apart. The close time frame in and of itself would make anyone raise an eyebrow. However, if one is thinking that reincarnation would only be possible if and only if the former being returns after his passing, this would render the case closed, right?

Watch my short commentary on the idea of time overlap and the phenomenon of “Walk Ins.”

There is a term that has been bandied about in many schools of spiritual thought, namely within a religious or mystical context. Walk In is a process that has been simplistically defined as an agreement between souls in which one soul essence agrees to inhabit the body of another with the others consent, of course.  Now there are many references online about this phenomenon and probably as many descriptions as to how this occurs and under what condition, but insofar as my understanding, here’s what I’ve surmised may (and I caution – may) have happened in the case of Paws’ essence entering that of a brand new kitty now named Clover Paws…

It was Saturday, February 18, 2012 at roughly 12 noon local time in southern California. I’d been wrapping up a trip out west to attend the popular Conscious Life Expo and do an interview with well known hypnotherapist Dr. Bruce Goldberg. We were spending our last day with family near Palm Springs and readying our selves to head back east later that day, when we got a call from our veterinarian in which Paws had been boarding during our trip. Sadly, Paws had declined in health drastically while we were away and we were asked to prepare to not see him alive by the time we got back. Though devastated and surprised at the doctor’s edict, we accepted it nonetheless. As we got a recap from the doctor about Paws’ last day or two, she explained that it seemed that he had not been himself at all – describing almost like a walking shell; technically alive but not “there.” She said he seemed like a zombie, simply going through the motions of life but not really living. Though unsettling, we found that description quite interesting and even familiar to what we’ve seen before.

I’ve always felt that in some instances when the essence of a person is preparing to physically die, the essence (or spirit) will vacate the body prior to it being declared deceased. This too has been discussed as a possibility during the process of passing over and yet little is truly known about the mechanics of such a process. I recall that when my father was close to death, I could see in his eyes an absence of life. More than just lethargic, his spirit had no longer animated him. I felt as if I’d been looking at a moving shell of sorts.

Upon reflection some months after we got our new kitten Clover Paws and pondering how he may in fact be a reincarnated Paws, given the date overlap, I recalled the veterinarian’s detailed description of Paws’ demeanor. Both my husband and I had wondered whether Paws’ essence could have vacated his body, perhaps a day or even hours before his physical passing (on February 17th) and re-entered a brand new physical body on February 18th – the day Clover Paws was born. The idea seemed plausible – at least as “plausible” as something this bizarre could be. Furthermore, considering our ideas of time flowing like a river – in one direction, could it be that the true nature of reality is actually absent of linear time as we understand it? This too calls into question the legitimacy of time and space. In the case of Paws’ “re” incarnation, nothing would be off the table!

Either way, it seems that Paws saw fit to continue his sojourn with us and for that we are both truly grateful.

As a metaphysical researcher, I am consistently fascinated with the multiplicity of experience that reality continues to reveal. Though voracious in my quest to understand, I’ve also realized that the goal may not be in settling on how it all works, but to continue to observe the workings of life itself.

As the quest for greater understanding continues, let us not only keep an open mind but be mindful of the fact that we may never fully understand how it all works – at least not while in this incarnation and in physical form. Whether we’re discussing soul contracts, reincarnation, past lives or walk ins, let us not get caught up with the labels we attach to a meaning that no language will ever be able to fully explain about the mystery we call life.

And let us always remember as Richard Feynman once said…

[quote]It does no harm to the mystery to know a little about it.[/quote]

Alexis Brooks is the editor-in-chief of Higher Journeys, an award-winning talk show host, #1 best-selling author, and international speaker covering metaphysics, spirituality and personal transformation. Her work explores consciousness, human potential, and the deeper characteristics of reality from a transcendental perspective and her approach to these subjects have been described by many as “clear and easy to understand” in covering an otherwise complex and esoteric subject matter. Alexis' mantra: If you dare explore the mystery, Universe will more than meet you half way!
«Previous Post
The Quantum Mechanics of Fate»Next Post
Why Your Own Intuition is the Most Powerful Force You Have