2016 – A Forecast by the Numbers with Sharon Millstein 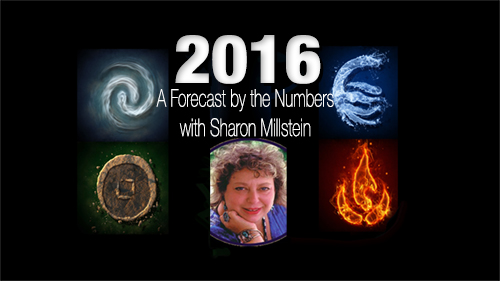 In numerology, every number has a special significance and an energetic influence that is tightly embedded within the matrix we call 3D reality.

As we prepare to leave 2015 an eight year and move swiftly into what celebrated numerologist Sharon Millstein calls a number of power, the 9 year, there’s much she cautions us to be aware of.

What will this nine year of 2016 signify in terms of which direction this planet will be heading? Let’s check in with Sharon – for this – our annual New Year forecast by the numbers. 2016.

In this annual end of year episode with Sharon Millstein we discuss:

Further reference/links from this episode:

Sharon’s 2015 forecast…what actually played out? (A Must Listen!)

The Dead Sea is shrinking! Roads, caravans and power lines are swallowed up by giant sinkholes that are appearing as waters vanish from Israeli shores.

Huge crack forms in Wyoming mountain: “It’s just like the ground opened up.”

Sharon Millstein is a psychic counselor, public speaker, numerologist, clairvoyant and healer who lives in Taos, New Mexico. She has appeared on numerous radio shows locally as well as globally.

Her radio show “The Sharon Millstein Numerology Show” aired in Taos in 1985. She has been published in many newspapers including the British Newspaper “The Metro.”

Sharon has been doing readings and healings for over 43 years. She uses her insight and gifts to help people move through trauma, as well as help them to unblock walls of fixed behavior. She believes that her gift of seeing and her ability to being empathic has helped her to facilitate others, which has resulted in them being catapulted to move!

She says, “This is ‘Classroom Earth’ and we have many lessons and homework to do here while on this planet.”

As a child, she had the power to see, which helped her navigate through many years of childhood challenges.

She loves, and uses her passions of colors, crystals, essential oils and numbers to help her clients. Her other interests are her animals, nature, and organic food and she uses her food as another modality to help people heal.

Her postulate: “everything is about vibration.”

To learn more about the work of Sharon Millstein:

Alexis Brooks is the editor-in-chief of Higher Journeys, an award-winning talk show host, #1 best-selling author, and international speaker covering metaphysics, spirituality and personal transformation. Her work explores consciousness, human potential, and the deeper characteristics of reality from a transcendental perspective and her approach to these subjects have been described by many as “clear and easy to understand” in covering an otherwise complex and esoteric subject matter. Alexis' mantra: If you dare explore the mystery, Universe will more than meet you half way!
«Previous Post
Shared Dreaming – Just a Notion or Something More?»Next Post
The New Human: Star Children -The Extraterrestrial Connection